Teyana Taylor is previewing a new music video for her upcoming album, and it pays tribute to Michael and Janet Jackson.

G.O.O.D. Music artist Teyana Taylor recently announced that her new album is ready and set to be released next month. She is teasing a new music video for her song “Bare WIt Me” on her Instagram. Teyana is known for aligning with some of the greats when it comes to the music and the message. She famously performed an incredible dance number in Kanye West’s music video for “Fade” and co-starred with T.I. in the short-film music video for their politically charged anthem “You (Be There)” in the fall of last year. This triple threat is no stranger to dance, and her impressive footwork was showcased in her new video for “Bare Wit Me.”

Teyana didn’t give away too much in the short teaser that she posted, but it’s enough to tell that she pays homage to the late King of Pop, Michael Jackson, and his sister, Janet Jackson. The singer whose makeup in the video is contoured in the likeness of MJ is dressed in a long yellow coat as she and her backup dancers bust some MJ-type moves while seated in a triangular form arrangement. Teyana’s ensemble appears to be cut from the same cloth as that of Janet Jackson’s attire in her music video for her song “Alright” from 1989. Alongside the clip Teyana shared, came the caption, “A sneak peek of “BARE WIT ME” from #THEALBUM #JUNE2020 no games this time around. S/O to da squad!” 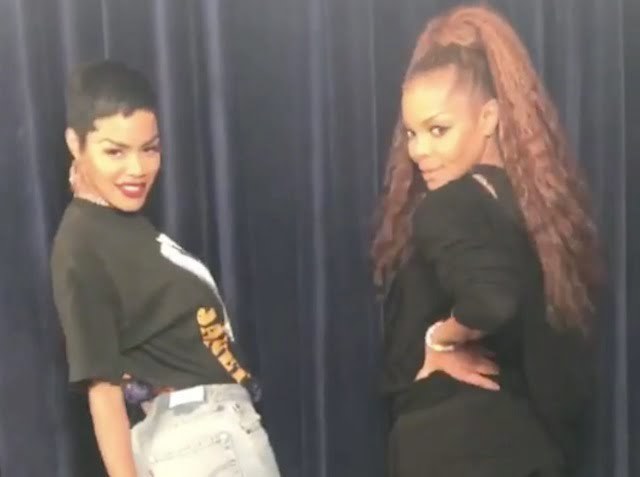 According to Teyana Taylor, her upcoming album will be more of a vibe. She mentioned during an Instagram Live session courtesy of Red Bull in late April that “The album is done – that’s why I look crazy right now…” she said. “Y’all gonna be so happy. This album is definitely more of a vibe. I don’t really do fast songs like that.” She continued, “There are some head-boppers. It’s not super-fast. You can dance and you can cry and you can ride.”

Last year Teyana confirmed that the album will feature a joint with Kehlani, which got fans really excited about the drop. Though the album didn’t meet its previously promised release date in December 2019, Teyana’s latest tease with the Jacksons tribute has set fans alight again, and they’re eager for the full album next month. Check out the short preview of Teyana Taylor’s upcoming music video for “Bare Wit Me” on her Instagram.