It seems you can now ‘cash’ Bhad Bhabie outside with Yung Bans.

The Atlanta rapper has been making appearances on Danielle Bregoli, Bhad Bhabie’s government name, Instagram in more ways than one. The 17-year-old rapper posted a video of herself on the social media platform to show off her new blonde dye job. While some focused on her new look, others were more concerned with the fact that someone seemed to be in the teen’s bed — Yung Bans. Considering Bhad Bhabie has had some nasty love triangles under her belt, it’s good to see that she seems to be in a committed relationship, but her age has put many on edge as BB is still shy of her 18th birthday and Bans is 20. 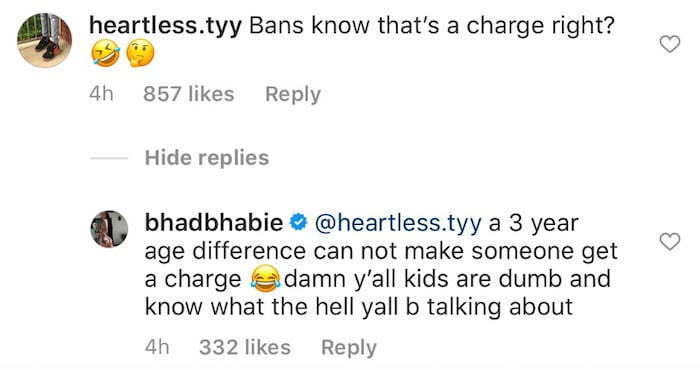 When asked if the “Partna In Crime” rapper was aware that being with Bhad Bhabie was allegedly a criminal offense, the teenage rapper hit back. “A 3 year age difference can not make someone get a charge,” she replied. “Damn y’all kids are dumb and know what the hell yall b talking about.” Bregoli’s birthday is in March, meaning she is only set to turn 18 next year, while Bans will be 21 on May 25th. “I’m more than happy!” Bhad Bhabie declared. “I just don’t like people speaking down on him for no reason. I’m not gonna let no one do that PERIOD.”

Bhad Bhabie seems pretty serious about this romance, to the point that she symbolized its with some ink. The teenager now has the word “Vas” tattooed on her thigh in honor of Bans’ birth name, which is Vas Coleman. It appears that the tatt was in response to a challenge that Bans posted on his IG Story, which said, “If you love me, get my name tatted.” Must be true love then.

Yung Bans has remained silent about the issue.