Tekashi 6ix9ine clocked in over 2 million fans on Instagram Live, and Lil Nas X was one of them.

In case you see Lil Nas X trending on Twitter, it’s not because he released new music, but because of what he wrote while tuning into Tekashi 6ix9ine’s IG Live on Friday. Of course, he could just be trolling, and one thing is for sure, Nas X has a good sense of humor that he always displays on social media. “No homo he looking kinda cute,” X wrote.

Lil Nas X announced that he is gay in June of last year on Pride Day. He won over a lot of new fans who praised him for his bravery. Let’s also not forget that he had one of the biggest songs on the planet last year, “Old Town Road.” Perhaps he and Tekashi 6ix9ine will do a collaboration. 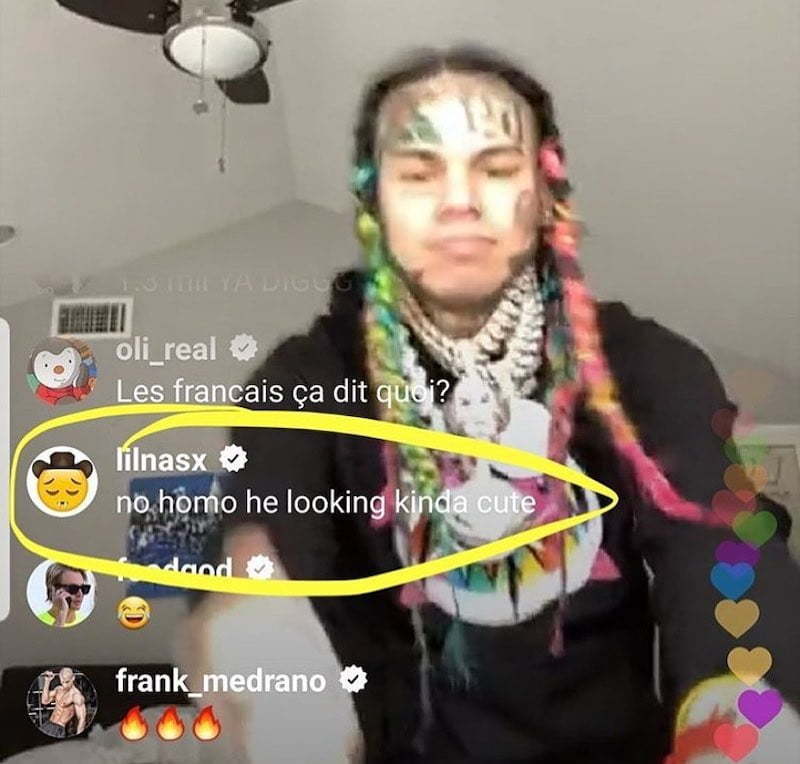 It has been just over a month since the “Gummo” rapper left Queens Detention Centre behind as he was released on a medical discharge. 6ix9ine’s asthma and prevalence for contracting respiratory infections led the judge to feel that his risk of catching COVID-19 while in prison was heightened and allowed him to serve out the remaining three months of his sentence in home confinement. Since then, Daniel Hernandez has reportedly been liaising with venues in Saudi Arabia, Australia, Europe, and South America to perform once Coronavirus has passed, with the offers said to be worth around $500,000.

If the New York native is looking to go on tour, he’ll need a banging single to back him up, and that’s just what he’s announced! Tekashi took over Times Square on Thursday as a giant billboard flashed the words, “This King Is Back,” as well as the time of 3 PM on Friday when 6ix9ine is set to be on Instagram Live.

While a few NY rappers going back n forth over who is king of New York. #6ix9ine just got the biggest billboard in Times Square … announcing he’s dropping a song tomorrow and going live at IG live at 3 PM. Is he finna reclaim the throne as king or na?

One person who did not tuned in is 50 Cent. After once being super close, Fifty no longer has time for his “son” due to him turning state witness against his Nine Trey Gangsta Bloods members. It recently materialized, however, that 6ix9ine learned a few tricks from the “Power” actor before they cut ties — like how to hide money. 6ix9ine’s ex, Sara Molina, made the revelation during an IG Live session of her own, and Fifty supported the claim by tweeting, “Yeah [6ix9ine’s current girlfriend, Jade] will never find it, and i’ll show them my Taxes right after Trump. LOL.”

Under the terms of his home confinement, 6ix9ine is allowed to release new music and is even working on an album in English and another in Spanish.