Kylie Jenner wished her baby daddy Travis Scott a happy birthday in a sweet post on social media, spilling all her feelings.

The billionaire entrepreneur shared several photos in an Instagram post celebrating Travis Scott on his 28th trip around the sun. It included videos of Travis playing with Stormi and even one of him riding her around on a bicycle while she was safely secured on the back – cuteness overload. The famous parents are very hands-on with their 2-year-old daughter and do a great job at co-parenting together.

“DADA,” Kylie began. “Happy birthday to daddy of the year! I’m slowly but surely starting to accept the fact that storm is a daddy’s girl. but whatever. we went half on greatness! the most beautiful, smart, loving and funny little baby. the best gift. ok i’m crying. love you forever! @travisscott,” she wrote in the caption.

Kylie Jenner recently said in a spread with Harper’s Bazar that Travis Scott was her best friend while he told XXL Magazine in December that he will always love Kylie. Though a lot of fans suspect it, Kylie and Travis haven’t confirmed that they are back together. Nevertheless, they’ve been spending time together because of Stormi, who makes frequent appearances on their social media pages. 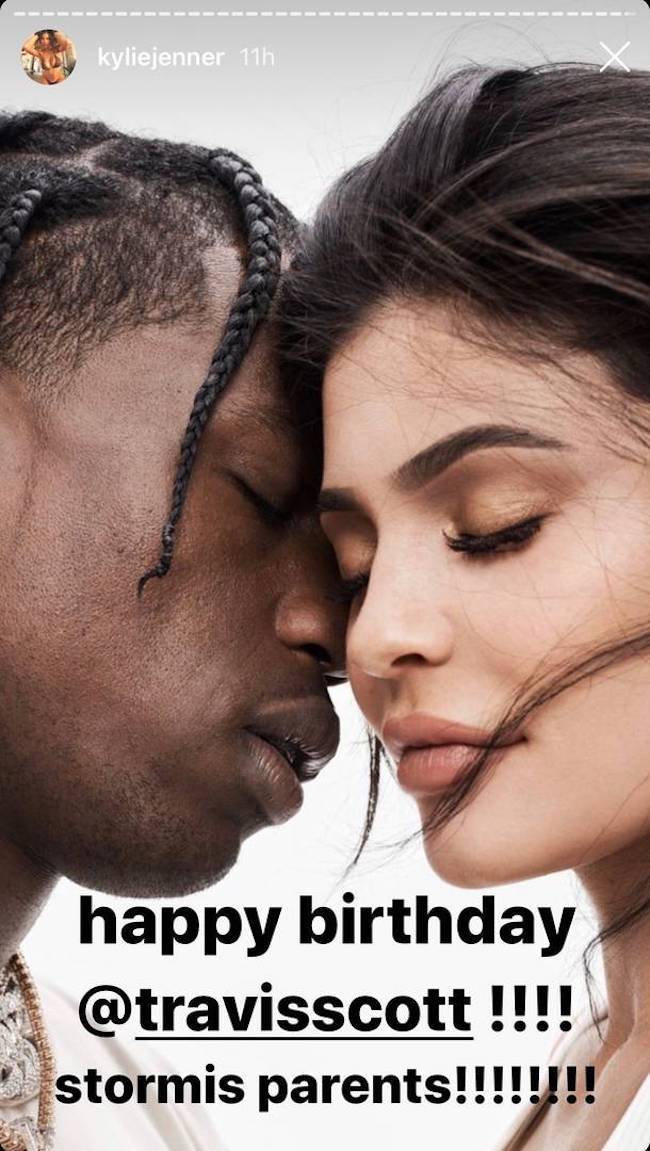 Last year a source confirmed that the couple had split, but they each maintained that their priority was their family, whether they were in a relationship or not. There were some rumors circulating that they were talking about re-uniting just before Insider reported in early March that they had, in fact, already been back together for a month. Those rumors have since been quelled by a source who told another outlet that they’re still working things out. “They don’t really know how much they want to take things and are dealing with the process day in and day out,” the source said.

The couple seems to be big on birthdays, so fans are curious about what their quarantine celebration will look like and what lavish gifts might be presented. Kylie rented out an entire theme park for Scott’s 26th birthday and invited all their friends for an Astroworld celebration. Then last year, she followed up with an equally extravagant event and gifted her baby daddy a grey Lamborghini. The couple also went all out for their daughter’s Stormi World party this past February and last year, February.

Travis Scott has not talked much about how he plans to celebrate except he plans to get wild according to a caption he wrote on a throwback photo he shared on Instagram. “Since a kid Laflame just wanted to rageeee!! Let’s get wilaaayyy todayyy! Love u guys!” the rapper and producer wrote.

DADA ? happy birthday to daddy of the year! i’m slowly but surely starting to accept the fact that storm is a daddy’s girl. ? but whatever. we went half on greatness! the most beautiful, smart, loving and funny little baby. the best gift. ok i’m crying. love you forever! @travisscott