Alkaline has been making some very bold moves since the start of 2020, even getting at both Popcaan and Teejay in one of his recent releases titled “Monopoly.” However, April 20 saw Alkaline pulling off one of his boldest moves yet, upgrading from what many have called sneak dissing to a more direct jab at nemesis Vybz Kartel. The Worl’Boss is not one to take anything lying down, and while he did not answer the Vendetta boss in song, he did take to social media to bash the “Formula” deejay.

The exact line sung by Alkaline comes from his new diss track titled, “Nah Fi Like.” According to the Champion Boy, the persons who claim that they are running dancehall are nothing but liars, essentially denouncing Vybz Kartel’s many claims of governing the streets while being behind bars. As a matter of fact, Alka seems to think Vybz Kartel is only in control of ‘his own destiny. “Nah get no p***y Annie Palmer, betta wol yuh corner,” he deejays about the self-proclaimed King of the Dancehall. Annie Palmer is a colloquial term used to refer to someone who usually pleasures themselves sexually.

Kartel had quite a lot to say when he took to his Instagram account. He actually added his twist to the ‘diss’ and addressed the situation through the eyes of Alkaline. “Dear Lord. Thank you for allowing me the opportunity to be in America counting buildings & billboards instead of climbing the billboard charts & selling gold, while Kartel locked up not getting p***y,” wrote Vybz Kartel. 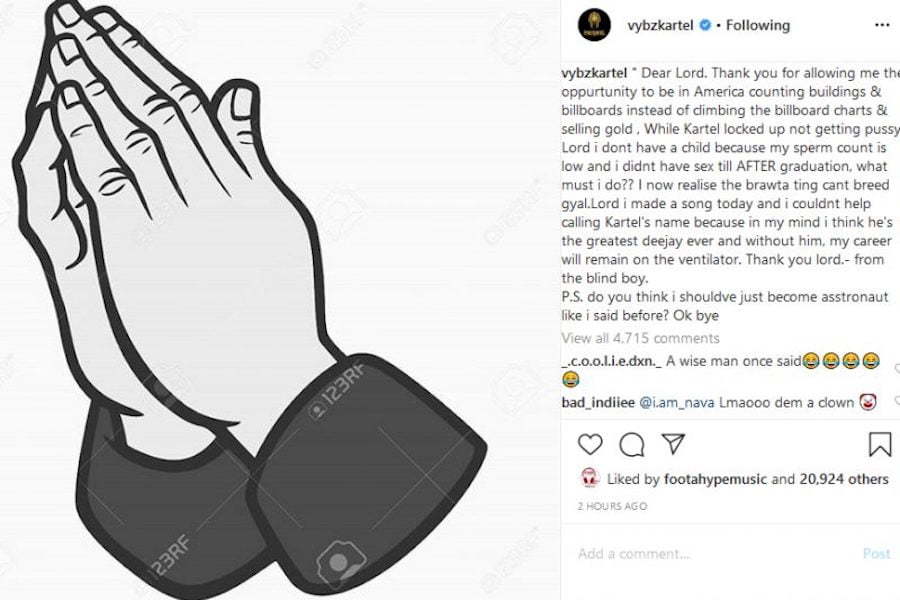 Vybz Kartel regularly takes shots at the MVP crew for what he sees as a poor use of their freedom. According to the Teacha, the lack of hits and sales weigh heavier when you consider that, for the most part, the MVP crew currently resides in America.

He continued in his ‘role’ as Alkaline, “Lord I dont have a child because my sperm count is low and I didn’t have sex till AFTER graduation, what must I do?? I now realise the brawta ting cant breed gyal.”

The “brawta thing” is linked to a line in Alkaline’s track “F**k You,” which was released in 2016. Alkaline has always been free-spirited in his speech about what many deem as kinky sexual behaviors; however, a majority of Jamaicans did not approve of his tendencies.

“Lord I made a song today and I couldnt help calling Kartel’s name because in my mind I think he’s the greatest deejay ever and without him, my career will remain on the ventilator,” continued Vybz Kartel.
He ends the rant by stating, “Thank you lord.- from the blind boy. “P.S. do you think I should’ve just become asstronaut like I said before? Ok bye”.

Both Gaza and Vendetta fans have been going through this feud between their leaders for a number of years. Nevertheless, what do you make of Alkaline and Vybz Kartel reigniting their beef?