When you learn why Kranium and I-Octane are beefing you will be in disbelief.

What seemed to have started as a bit of public banter has now turned into the spilling of tea and so much more. Dancehall artistes Kranium and I-Octane were trading words earlier today after Kranium asked his followers a pretty interesting question. The “In Charge” artiste took to his social media to ask, “Weh IOctane find so much badmind friend from ???”

The question came about after the “Lose A friend” singer shared a quick video of the actors involved in the video for his new song, “Friend Killer,” which is set to be released a few days from now. Kranium’s questions immediately received a plethora of trolling responses; it was as if they were written before the question was asked.

You immediately get the sense that this would turn into something much more than a small joke, and that is pretty much what happened. I-Octane, who has been in a wonderful form since the start of 2020, decided to address Kranium for shading him. He started by saying, “Me just see this @Kranium. Yu see how unnu love f**k roun ppl.”

Damn I made a joke now im on IOctane badmind list

Kranium was thrown in the hot seat as I-Octane explained that each artist has his/her own set of topics to discuss. He actually drew on Kranium’s catalog to expound on his argument, “Most a ur song dem a who f**k pon who…R who fah gyal yuh a tek weh and f**k…still me dont have a problem wid dem cause me like dem songs too and dats yur lane.”

While the first few lines of Octane’s comments made for a brilliant rebuttal of Kranium’s question, many fans are criticizing the “Banga Phone” singer for what he said next. Octane decided to recount an incident in which he helped Kranium out of a sticky situation during Kranium’s come up. “Don’t fi get di days when dem same friend song did a run di place and yuh come link me at hot7 show in nyc and mi tek off me arm weh mark I-Octane ON IT AND PUT IT ON YOURS HAND AND MAKE YUH GUH INNA THE SHOW AS I-OCTANE…YUTE ADI SAME FRIEND SONG ME USE AND DO DAT FI YUH….ME NEVER TRY STYLE YUH R SONGS DEM YET SO HOW DIS DROP IN YUTE,” questioned a bewildered I-Octane in the comments of a post by Jamaican blog Tropix. I-Octane also tossed producer/artiste Ricky Blaze into the crew who he helped. 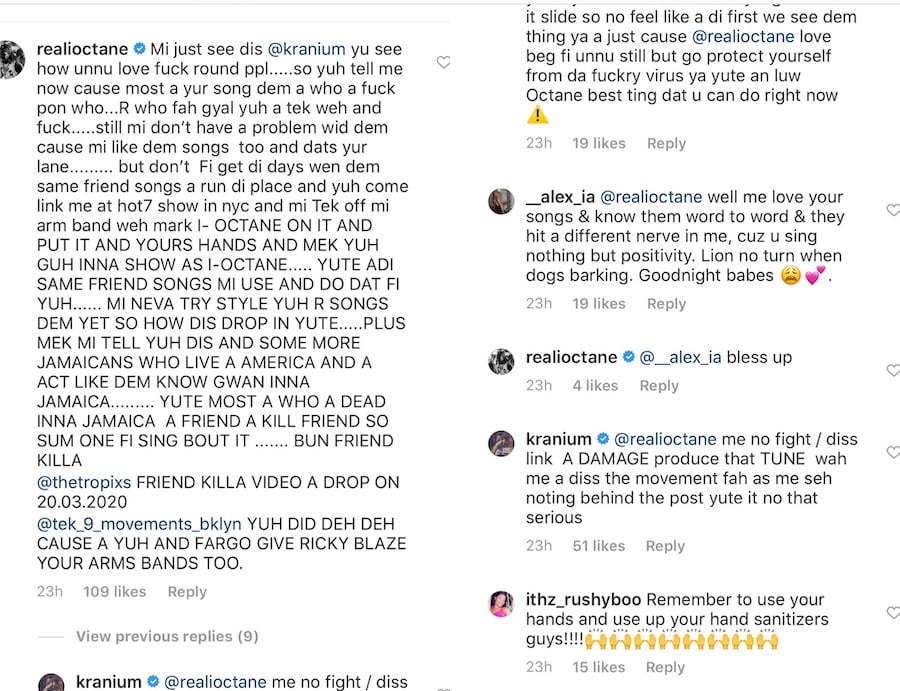 He also explained to Kranium, who resides in New York, that there are a lot of jealous individuals parading as friends here in Jamaica, and that phenomenon is at the heart of many of the murders that have rocked the island.

In his reply, Kranium highlighted that he is aware that ‘badmind’ persons are always afoot, however, clarified that the question did not come from a place of hatred but was done to lighten the mood. “Me know a nuff friend killer is around you but morewhile a little humor in life won’t kill you’,” he mentioned. 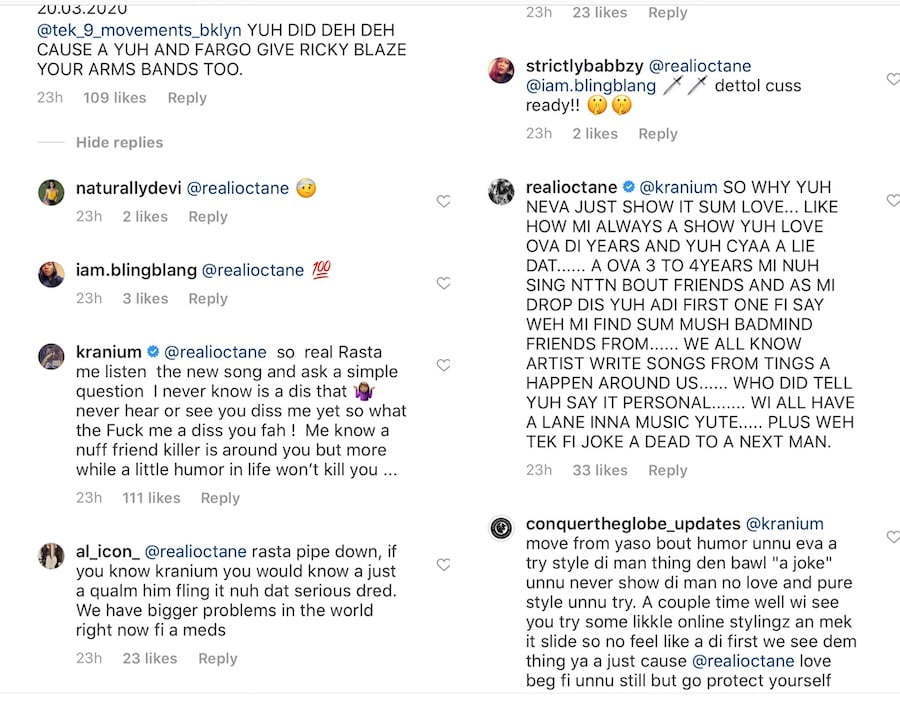 I-Octane dropped another reply asking why Kranium did not show the track some love instead of making fun of it, especially since it was his first ‘badmind’ track within the last 4 years. Kranium preached his innocence once more, “A DAMAGE produce that tune, wa me a diss the movement fah, as me seh noting behind the post yute, it no that serious.”

“Friend Killer” should be available for streaming on March 20, 2020.