Tekashi 6ix9ine hit “BEBE” has surpassed 1 billion views on YouTube, despite his next level snitching in court last year

6ix9ine is still as popular as ever, at least in some quarters of the music world. Anuel AA teamed up with Tekashi 6ix9ine to drop the audio and video for the reggaeton based track “BEBE” back in August of 2018. The official music video was uploaded directly to 69’s Youtube account. The video was directed by the Figure Eight Creative Group, which consists of Trifedrew, William Asher and TheDonCanon.

It’s safe to say that they did a fantastic job putting the video together. The major aspects of the video see an abundance of beautiful ladies and partying with 6ix9ine and Anuel at a hotel. A bunch of shots captures the rapper either getting into it with a few of the girls or jumping off into pools meanwhile being fully clothes. 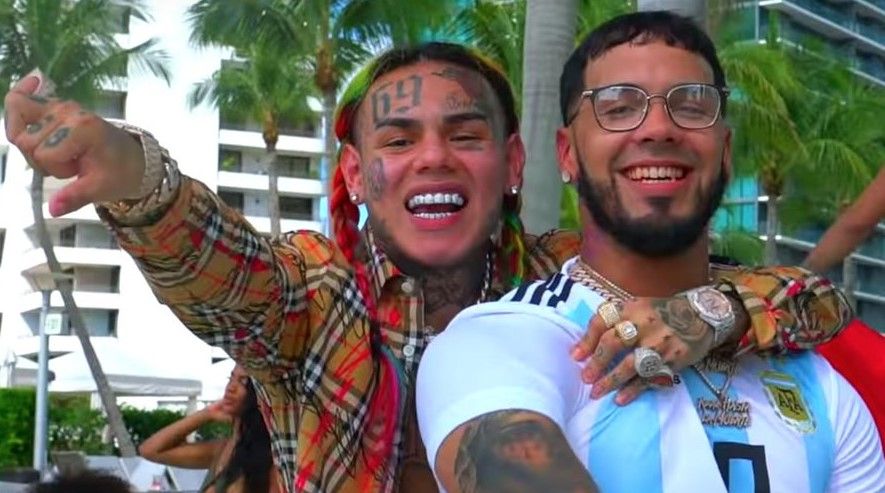 What makes this accomplishment even more special is that the young rapper who is achieving this meanwhile being locked away behind bars. Tekashi won’t have to wait too long to bask in all the glory of his success, as his official time of release is set for July 2020. The rapper who provided critical information to sink his fellow Nine Trey Bloods gang members plans to return to music upon his release. Sadly you won’t be able to catch the rainbow-hair rapper live since he has no plans to risk his life by appearing in front of a live audience.

With the rapper copping his first 1 billion views not too long ago, his fans have started to put some more research his other videos to see what else could reach the milestone. It seems “FEFE,” which features Nicki Minaj and Murda Beatz is the video and song that is next line. The official video which was released on Tekashi’s account was at 812,823,337 views at the time this article was published. “Still waiting for the 1 billion views on this,” commented one person below the official “BEBE” video. Tekashi’s supporters may just be some of the most loyal fans out there, sticking with their artiste even when the world turned against him. With fans likes these, maybe things won’t be too bad for him when he gets out.

If there was no trial and we were to take only the elements of the “BEBE” video alone into consideration, do you think the 1 billion marks would have been attained?