MoneyBagg Yo appears to take a shot at Meek Mill amidst his social media beef with Nicki Minaj.

It has been a very entertaining day on social media because of infamous exes Meek Mill and Nicki Minaj. The two have been apart for years and have both seemed to move on with each member of the former couple either getting married or starting a new family, but since their recent tumultuous encounter, the estranged exes have been firing off on each other on social media.

The rappers especially had time today when they went back and forth on Twitter, accusing each other of various crimes from domestic abuse to being an accomplice to rape. Many people have been reacting to Nick and Meek’s public lynching of each other online. MoneyBagg Yo was among those had something to say about it. “If u like or double tap some f*k sh*t somebody posted abt a n***a……don’t act like you cool wit the ni*aa that it’s abt when you see him ..ion get ppl,” the rapper wrote on his Instagram story. 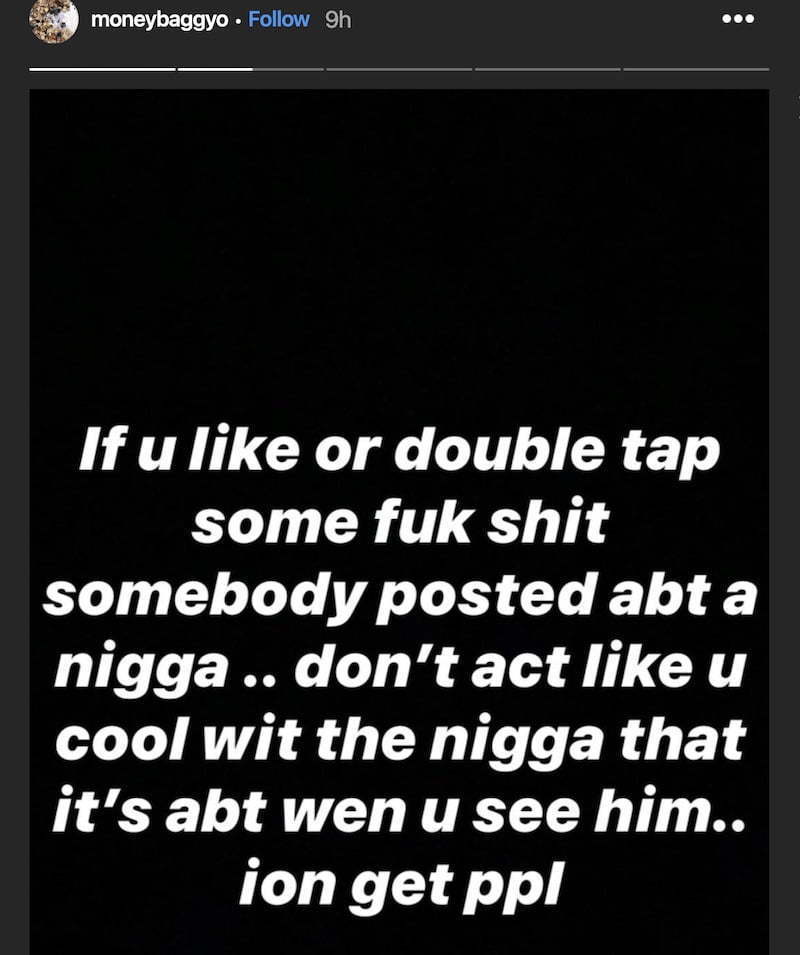 Meek Mill indirectly initiated the online banter today when he liked a picture trolling Nicki Minaj’s husband. The Young Money rapper responded with full spousal support urgency, claiming that Meek has been tweeting about her husband for months. Nicki Minaj shared several posts to her Instagram story trolling Meek Mill for his appearance and wardrobe as well. She also accused him of beating women while he accused her of knowing that her brother allegedly raped a child.

You have to see the tweets to believe it. Some fans started a theory that the two exes are very much still into each other, and that’s the only reason they entertain each other in this way. However, some fans are concerned about how their individual spouses- Nicki’s husband and Meek’s baby’s mother – must feel on the sidelines of this match.

MoneyBagg Yo basically said Meek Mill should keep the same energy when he seems the same people he shades online in person. Do you agree?

#MeekMill with the insta fingers today on a now deleted post ? #NickiMinaj #KennethPetty