The Game spent more money on lawyers than most of us will ever make in our lifetime.

The Game has had a long and complicated career, full of major successes as well as hard times, including several incidents that landed him in court. He’s been sued over physical fights, accused of sexual assault, and had to navigate the legalities of making music. Now the “How We Do” rapper is trying to warn others new to the industry about the extreme cost of acquiring lawsuits. The Game took to Twitter Monday to say, “Spent over $12,000,000 in lawyer fees since the beginning of my career. My advice to the new generation of artists is ‘walk away’…. I seen the most gangster ni**as in the world sue.”

The Game, whose real name is Jayceon Terrell Taylor, released his debut album, Untold Story, in 2004, and went on to sign with Dr. Dre’s label, Aftermath. In 2005, the same year Game released the hugely successful The Documentary under Aftermath, he was hit with a $280 million civil lawsuit after a radio station cameraman accused him of choking him out during an interview. More recently, Game was ordered to pay out $7.13 million to a woman who accused him of sexual assault in 2015. He later joked onstage about rumors that he was broke, saying, “Sh*t, what I’ma do now? Is Popeyes hiring?” 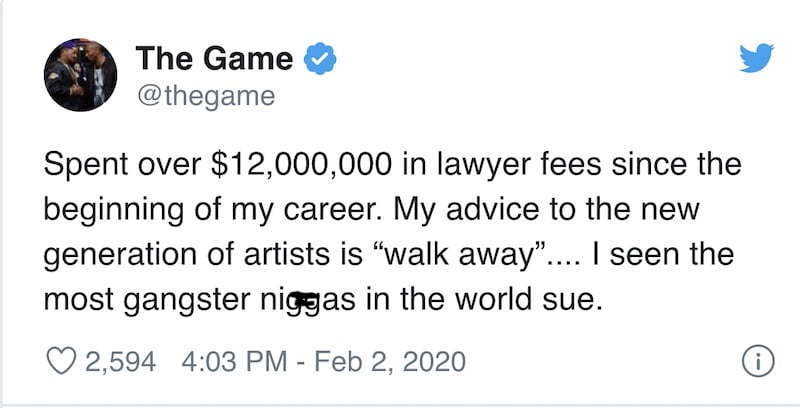 The Game has spoken before about his confrontational personality, sometimes getting him into trouble. In a recent interview with Nick Cannon, Game recalled a time when he was rolled up on by Suge Knight. He claims he didn’t back down, saying, “I drew my gun on all of them and held my own and from that day forward, it has been nothing but respect with Suge.”

The Game announced his retirement from rap last year saying his Born 2 Rap album is his last. These days he is just busy living life and speaking to his fans via social media.