Lil Wayne has been battling a lot of leaks lately including the tracklist of his upcoming album, Funeral.

Lil Wayne teased the release of his upcoming album Funeral, on Thursday and fans are already buzzing with excitement for the release. If the release date was not enough, fans are now getting a chance to window shop before the actual drop, as the tracklist for the album has allegedly been leaked. If the screenshot that has been floating around proves to be true, then we are looking at a 12 track album.

The features are also quite interesting, as we see the likes of pop singer Halsey, Corey Gunz, Gudda Gudda, Big Sean, Trippie Redd, Nicki Minaj, DaBaby, Lil Baby and Roc Nation boss JAY-Z. Jay and Wayne have shared a topsyturvy type of relationship over the years. Both have dissed each other in tracks and on stage shows. However, the latter years have seen the two label executives working out their differences, with JAY-Z even helping Tunchi out of a tough spot when he needed some extra change for a tax bill.

While the Jay feature is one for the books, another surprise is that Drake is not on the album. Drake and Lil Wayne have terrific chemistry that has produced some hip hop classics over the years, so it would be a shame if the 6 God is actually not on the project.

These are all speculations as the day of truth will be January 31, 2020, when the album is officially released. Funeral will make it Wayne’s 13th studio album and will follow up last year’s Tha Carter V release, which “debuted No. 1 on Billboard 200 With Second-Largest Streaming Week Ever for an Album, ” according to Billboard. 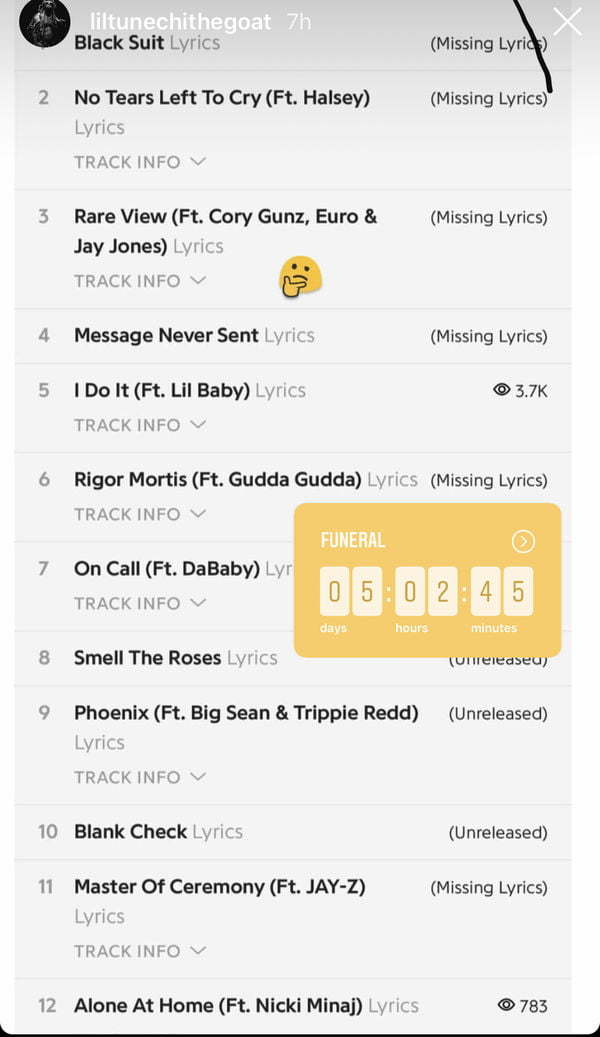 Some fans are concerned about the title of the album, fearing that it marks the last album Tunchi will ever release. While it seems highly unlikely that Wayne would quit the business and go cold turkey, stranger things have happened in the past.

Fans around the world cannot wait for the release to unlock what Funeral is all about, and the rumored tracklist is definitely adding to that anticipation. This is not the official tracklist t