Vybz Kartel reps dancehall with every muscle in his body and has been doing so since he stepped on to the scene in 1993. The dancehall Pharoah decided to share a throwback video of himself as he stepped outside of the airport in Amsterdam back in 2010. In true Vybz Kartel’s style, he makes the whole scenario entertaining, first questioning the man holding the camera.

“Picture you a tek or it a record?” he asked. After he got the confirmation that he was recording he had just the right freestyle to match, “Oh it a tape?? Gaza never rape big up sizzla, fanton moja, Barrington levy girls dem no wah leave we a so it go Amsterdam a yaso dem bomb saddam doh oh.”

As entertaining as the clip is, the real sauce is in the caption he dropped with the video, “#Dancehall has made so many ghetto youths get rich, tour di world & bring di Jamaica breeze go hot up planet eart’…a who ‘urt? #BigUp every artiste ( except dem 3 priest deh ) #BigUp every selector every radio dj and #BigUp di Fans #DANCEHALLFOREVER #Amsterdam 2010.” 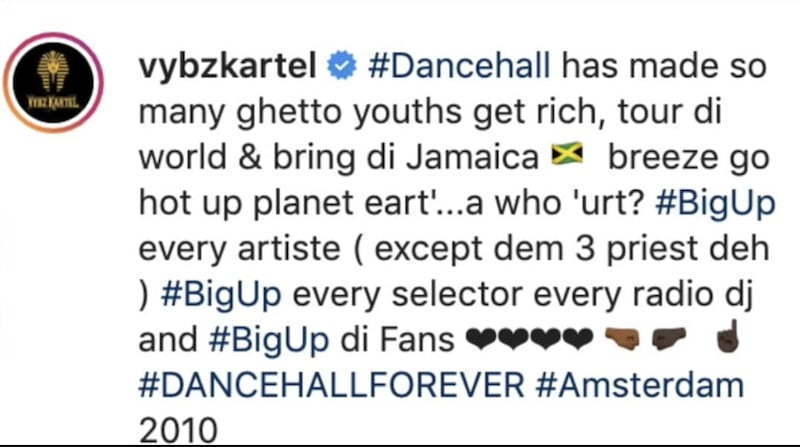 If you are not sure which three artistes he is referring to, you may want to revisit your dancehall history textbook. The triple threat of the MVP group of Jahmiel, Mavado, and Alkaline seems to the ones being aimed at in Kartel’s caption.

Mavado and Kartel have been beefing for almost a decade and a half, with both of them calling truce a few times. Alkaline and Vybz Kartel have also had their differences, presumably forming out of Alkaline, not acknowledging Kartel as one of his main inspirations. There has been no confirmed beef between Jahmiel and Vybz Kartel, however, birds of a feather do flock together. Therefore, he is also getting thrown under the bus.

The likes of rapper Busta Rhymes and electronic music producer and DJ Diplo all dropped comments below his post.