Princess Love says she is divorcing her husband of three years Ray J.

There’s trouble in paradise, and it looks as though it’s all coming to a crashing end. Ray J and his wife, Princess Love, have not had the easiest relationship of late, to put it mildly. The pair, who have been married since 2016 and star on Love and Hip Hop: Hollywood, have both taken to Instagram recently to take shots at one another.

“Left me and Melody stranded in Las Vegas and blocked me from calling… now you wanna post family photos. #ByeUgly,” Princess commented on a red carpet photo that Ray J posted on his IG. 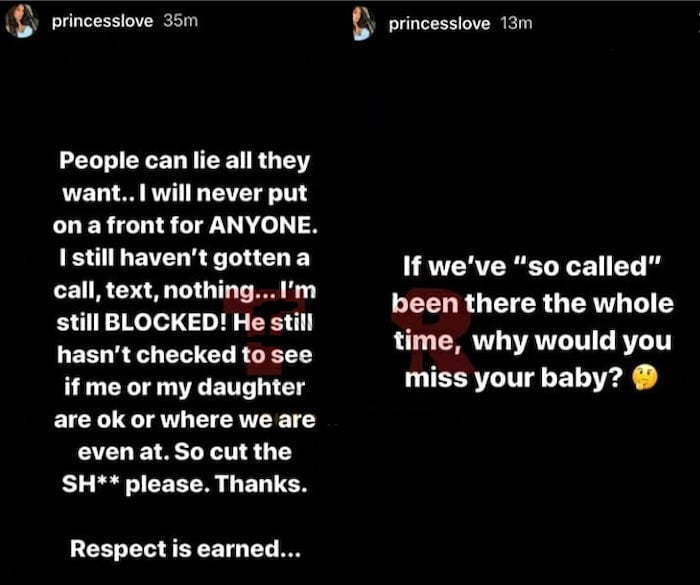 Denying the claims that he had left the Nevada capital, Ray J posted an emotional video from his Las Vegas hotel room in which he said, “To insinuate I’ve done anything to harm my daughter is sad man. I just don’t understand how somebody can get stranded when we never left, we’ve been right here. People are going to get into little arguments here and there, it’s small stuff that you could work out, but to take this to social media and create this crazy story about me leaving my baby in harm’s way is not cool.”

The video was captioned, “I miss my baby Melody so much it hurts!” Princess then responded with a fantastic point — “If we’ve ‘so called’ been there the whole time, why would you miss your baby?”

“I still haven’t gotten a call, a text, nothing… I’m still BLOCKED,” the expecting mom put on her Instagram Story. “He still hasn’t checked to see if me or my daughter are ok or where we even at.”

My heart has been heavy for the last past week. I miss my baby Melody so much it hurts! I’m so sorry the world has to watch a young relationship like ours fall down. In order to be solid in a relationship you have to keep people out of it and let God work it out. But this hasn’t been the case. I will continue being the best man and father I can be no matter what’s on the other side. Without respect there is nothing. Love took a L this time. ?

Now, things have escalated even further. Commenting on her husband’s video, Princess wrote, “Filing for divorce when I get back to LA.” Princess followed that up with a video in which she further unpacked the situation: Ray J reportedly wanted her to move to Vegas, but she does not feel it is a healthy environment in which to raise children.

Are her threats for real? Is she just trying to make Ray J squirm? Is this all a ploy to bring on labor?

#PressPlay: #PrincessLove and #RayJ are having a rocky few days, after Princess aired her husband out for allegedly leaving her stranded in Vegas. _____________________________________ Now, Princess is telling her side of the story. She says Ray tried to convince her to move to Vegas, and when she declined his request, he got a little upset. Princess also says she no longer wants to be married. ?