Drake and his dad, Dennis Graham, are locked in a rare beef between them over some of the rapper’s past lyrics.

Drizzy wants us to know that he only spits the truth regardless of what his pops says. Dennis Graham, Drake‘s dad, stopped by 106 FM to do an interview with Nick Cannon this week. During the interview, Nick talked to him about his relationship with Drake. “Do you have to deal with any of that stuff from like the upbringing of Drake and him kinda having to live in Toronto without you at times? We hear it in his lyrics sometimes,” Nick Cannon asked. Dennis proceeded to dish out a story that he actually used to speak with his son “if not everyday then every other day.”

Dennis Graham went as far as to share that he had a serious talk with Drake about this once because the things he was saying was “not cool.” According to Dennis, when he brought up the conversation of his son’s mentions to him and asked him why he constantly spews this narrative, his response was, “Dad, it sells records.” 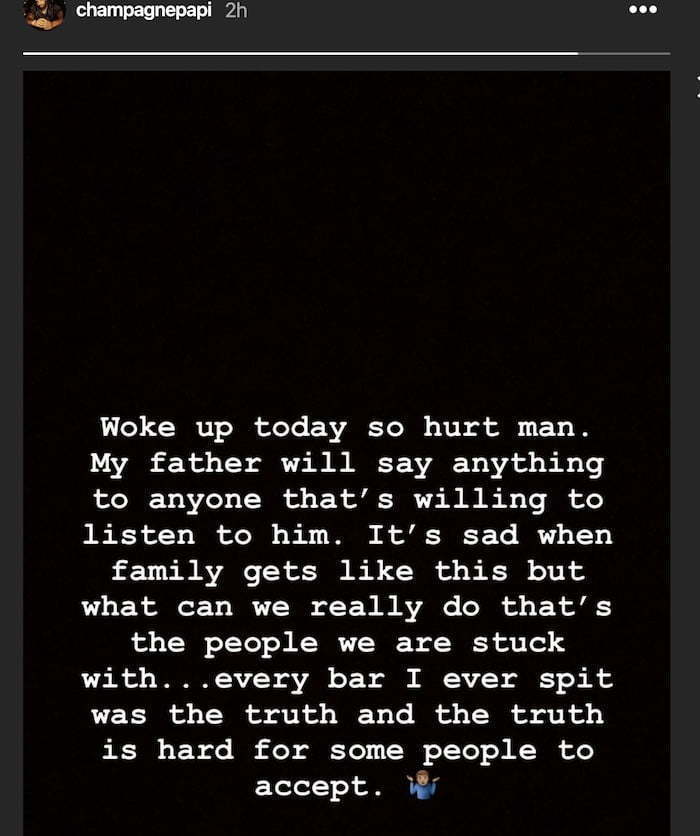 Now Drake is implying that his dad’s story was a flat out lie. Today the Canadian rapper took to Instagram to defend his case. In a post shared to his IG Story, Drake said, “Woke up today so hurt man. My father will say anything to anyone that’s willing to listen to him. It’s sad when family gets like this but what can we really do that’s the people we are stuck with… every bar I ever spit was the truth and the truth is hard for some people to accept.”

We see it all the time where parents try to save face when they are called out for being inadequate during their celebrity child’s upbringing. Fans were quick to assure the ‘God’s Plan’ rapper that they believe him and not his dad. “Who really wants to admit they were a bad father?” said one user. Another commented, “Okay but drake and his mother were living in their aunts basement when he was a kid soooo.”

It sounds like fans are not convinced by Dennis Graham’s story. One even suggested that he would do “anything for clout.”