Tyga is calling BS on one thing or another about him and his ex-boo, Kylie Jenner.

It has been a hectic couple of days for Kylie Jenner after it was announced she had split up with her child’s father, Houston rapper Travis Scott. Reports began to surface that the two had been on the outs for several weeks and are already discussing plans to split custody of their daughter Stormi. And if the plot couldn’t get any thicker, sources spotted Kylie pulling up to a studio where her other famous rapper ex-boyfriend Tyga “just so happened” to be working — at least that’s what she claimed.

Headlines began to form that Kylie went back to her old thing Tyga only days after breaking it off with Travis and the billionaire reality star took to Twitter to deny the allegations. Tyga had since been quiet about the entire situation, but moments after Kylie denied they were reunited, he just posted the “cap” emoji, which is new slang to indicate when someone is lying or fabricating something. 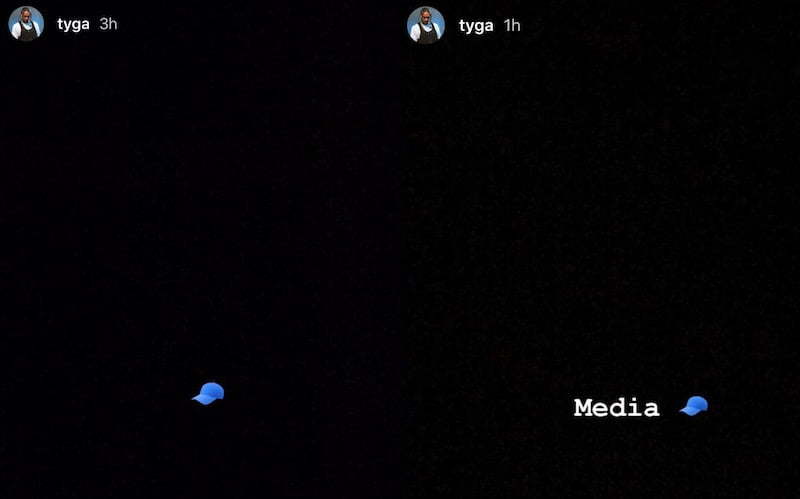 At first, it was unclear if Tyga was responding to the blogs saying he and Kylie linked back up, or if he was accusing Kylie herself of hiding the truth. An hour later, Tyga took to his IG story again and posted the word “media” with another cap emoji.

“The internet makes everything 100 times more dramatic than what it really is. There was no “2am date with Tyga”. You see me drop two of my friends off at a studio that he happened to be at,” Kylie tweeted on Thursday. So it was interesting timing for Tyga to say someone was capping, but he may be corroborating her story.

Kylie went on to say she and Travis are on great terms and are focused on raising their daughter to the best of their abilities. The parents split after publicly dating for two years. Kylie was seen hanging with Travis only months after she broke off her three-year-long relationship with Tyga in 2017.

The internet makes everything 100 times more dramatic than what it really is. There was no “2am date with Tyga”. You see me drop two of my friends off at a studio that he happened to be at.

There is no way to know what exactly went down between her and either of the famous rappers over the last few days, but for now… the saga continues.