Chris Brown has canceled his INDIGOAT concert in Columbus tonight due to a sudden illness.

Chris Brown fans in Columbus, OH, are not too happy tonight after hearing news that the singer and the concert promoters for his show announced late Wednesday evening that the show has been canceled. Nationwide Arena, the venue for the show, announced via a statement on Twitter that the show was canceled due to illness.

“Due to illness, Chris Brown will not be performing tonight in Columbus, OH at Nationwide Arena — refunds will be issued at point of purchase,” the statement reads. Fans will be able to get refunds for their tickets as a lot of them started going off about the last-minute cancelation on Twitter. 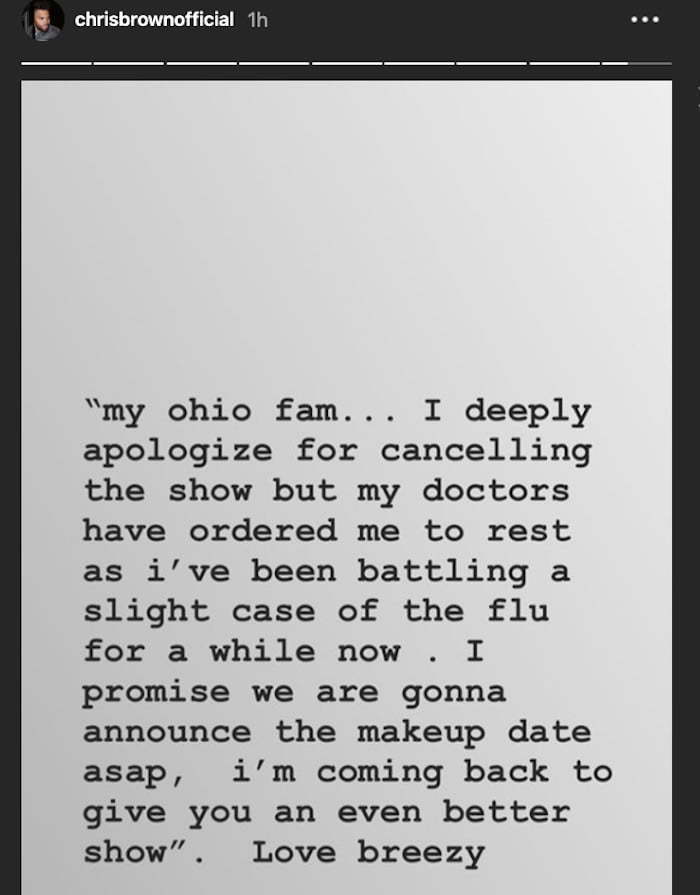 Brown also announced via his Instagram Live about an hour before the show was scheduled to get underway that he cannot perform due to an illness. “My Ohio fam… I deeply apologize for cancelling the show but my doctors have ordered me to rest as I’ve been battling a slight case of the flu for a while now. I promise we are gonna announce the makeup date asap, I’m coming back to give you an even better show. Love breezy,” he wrote.

Chris Brown performed at the PPG Paints Arena in Pittsburgh, PA last night without any incidents. Tory Lanez, Ty Dolla $ign, Joyner Lucas, and Yella Beezy are also on the “INDIGOAT” tour. It’s unclear if his shows in Chicago tomorrow night and in Indianapolis, IN this weekend will be affected by his illness.

SHOW ANNOUNCEMENT: Due to illness, Chris Brown will not be performing tonight at @NationwideArena. Refunds will be issued at point of purchase.