Etana wasn’t here for dancehall radio personality Nikki Z bringing up her past issues with being a “Trump supporter.”

Multi-talented media personality Nikki Z got completely handled by singer Etana in what seems to be an innocent case of misunderstanding. The saga started with NikkiZ responding to a tweet from writer Ava DuVernay about proudly wearing locks. “Let’s replace those images of a Trump supporter gleefully cutting a young black man’s locs to give him a “better life”… with the beauty and majesty of life with locs. If you adorn yourself with natural locs, share your pictures with the hashtag #loclife. I’ll start. xo,” DuVernay tweeted.

Many fans then began posting their own pictures showcasing their locs. Nikki Z also decided to join in when she tweeted a photo of her posing with Grammy-nominated Reggae singer Etana, at the most recent staging of Reggae Sumfest. The image seemed to have captured two black queens with bright smiles and natural black hair. The post was captioned, “#loclife @EtanaStrongOne.” 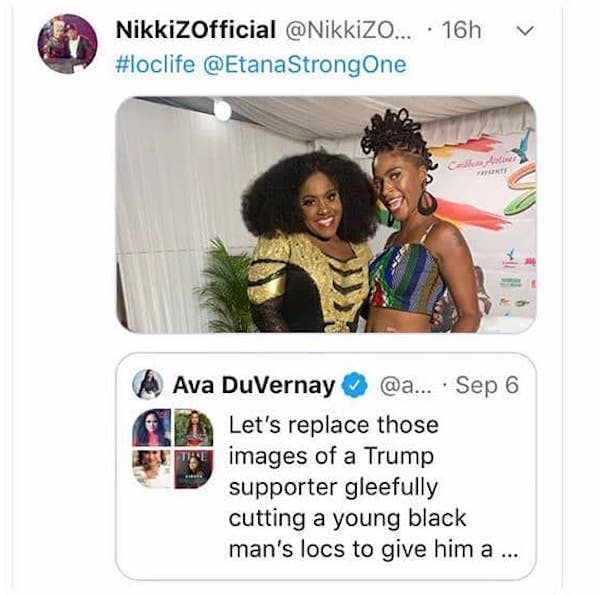 While the intentions of this post may have seemed entirely innocent, the “I Am Not Afraid” singer’s response highlighted that it was not perceived as such.

Etana blasted NikkiZ stating, “Leave me out of your political Tweets I will talk about and get involved in what I choose.” Nikki Z then defended herself in a post stating, “Did not even think of it in any offensive way…just grabbed the first cute pic with my Locs. No offense was meant, but I get you.”

This sparked code red for Etana, who followed up by saying, “I see industry mattress coming at me but I know enough about such a character to know they just need a hug. Take care of you. Try to truly stay happy. @Keona_densia @connectipr my dear why do they stay so angry. I wish I could make them all happy instead.” She then added another tweet, “I cyaan bother trust me I can’t lol!” 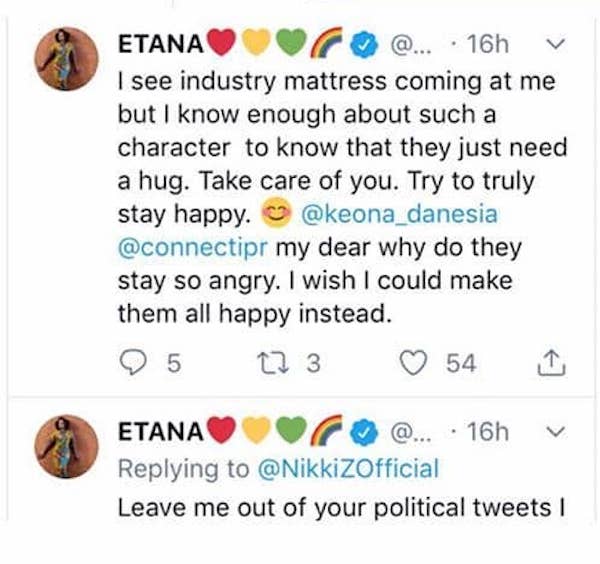 Nikki Z once again seemingly waved her white flag of peace by tweeting “Wait hold on, I made a tweet that in all honesty meant no ill will… wasn’t even thinking about your past debacle…and that is what you respond with? I posted the picture because it was beautiful. No other reason and you resort to name calling?”

She followed that up with another tweet, “What’s crazy is I can get the misunderstanding after I thought about it…call it a dumb mistake but Bwoy how a simple mistake can show you people true thoughts… here I was thinking 2 beautiful natural Queens…it was about hair. live and learn carry on.”

Nikki Z had posted the original picture back on July 28, 2019, with the caption, “She earned that title ‘The Strong One’ @etanastrongone a big fav at @iflycaribbean @reggaesumfest.”

So it is very clear that Nikki is a fan of Etana and meant no harm. Since then fans have been going off on Etana many of them stating that she has always had a bad attitude.

One fan commented, “Etana sick stomach nowadays.” While another added, “Etana is a fraud. We’ve already seen her true colours.” Some persons are of the opinion that Nikki Z intentionally provoked Etana stating, “Nikki Z knew wtf she was doing but just never knew etana would take it there. Another fan added, “NikkiZ lie af and she knows very well she coming after Etana but I felt the industry mattress part tho #savage”

Nikki closed off the whole situation by reposting a tweet saying, “Never argue with an idiot.” And since then she’s been tweeting up a storm claiming it’s better to walk away from arguments, and that getting love is much better than getting hate. Whether it was innocent or intentional, Etana showed she is not the one to mess with.