Fifty is closing out the week by taking aim at one of his usual targets, Floyd Mayweather while adding Michael Blackson to his growing list of targets. 50 Cent and the boxing legends were close friends before their bitter fallout, and there was no known relationship between himself and the comedian, but unfortunately for Blackson, he is now indebted to the G-Unit rapper. Fif posted a photo of the two of them on his IG, and his caption pretty much tells us where his mind is.

“Waiting I’m not even mad, these ni**as can’t read. LOL #TheKing,” 50 wrote in the caption while making sure that he promoted his Branson cognac in the hashtags. 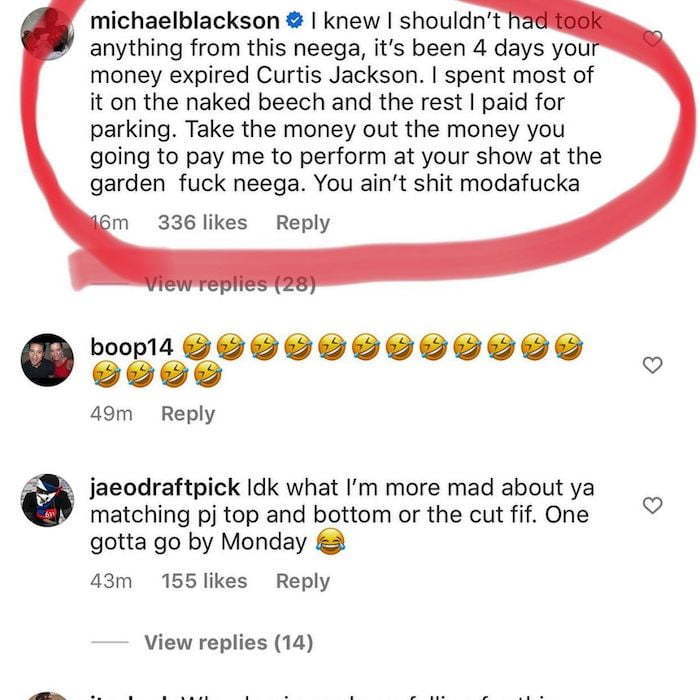 50 Cent has been promoting his Tycoon weekend party in New York City for the past two weeks, and all of his friends will be sure to bring their own cash because no one wants to take any money from the Fif. If anything, learn your lesson from Bow Wow. Michael Blackson did not learn anything because he made the mistake of taking money from 50 Cent last night, and now he better have that money by Monday.

Blackson has already admitted that he messed up big time because he left a comment on 50 Cent’s post on IG saying that he knew that he should’ve taken the money. For someone who doesn’t like people owing him money, Fifty sure likes to hand out money randomly. You’re a bigger fool if you take it, then you will end up wishing you never met him.