Love and Hip Hop: Hollywood is coming back to a TV near you with a brand new season, so you know the cast members have to get their storyline up. A1 and his baby mama Lyrica Anderson are off to a good start where that is concerned. She posted a photo of herself and Floyd Mayweather on her IG on Wednesday, and her post seems to be ruffling some feathers. Now there are speculations that the retired boxer is clapping them cheeks.

“Thank u @floydmayweather for attending my Show !! Very Special Night!! #SwipeLeft,” she wrote. Her soon to be ex-husband, A1 was feeling extra petty and left a commented on the post writing, “[Lyrica Anderson] I’m so happy for y’all.. Love Wins.”

A fan also asked her if she and A1 are not together anymore, and she said a resounding, “no.” 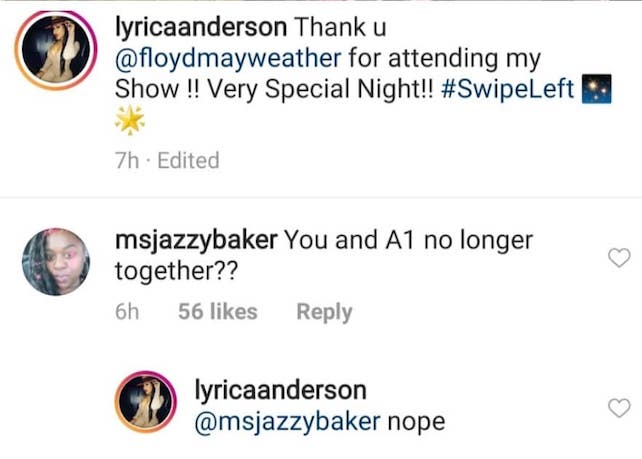 A1 and Lyrica broke up in the last season of Love and Hip Hop: Hollywood over some cheating rumors. There were also some rumors claiming that she cheated on him with Safaree Samuels, but both she and Samuels denied the allegations.

The music producer later claimed that it was a typo the comment that he wrote, but the blogs already grabbed a screenshot and ran with it. Nothing you do on social media these days remains unseen for too long.

Oop! #A1 came through with his petty boots on. ? #LyricaAnderson #FloydMayweather