Bounty Killer is calling himself the Bob Marley of dancehall.

Bounty Killer is one of the most recognized names in dancehall but is he the Bob Marley of reggae’s unruly cousin, dancehall? Bob has been crowned the king of reggae, and since his passing, no one has risen to take that spot. Meanwhile, in dancehall, there is a constant debate over who is the king of the genre with Vybz Kartel and Beenie Man currently in a tug of war.

Killer, who is undoubtedly one of the most influential artists in the genre, is stamping his authority on the “kingship” argument while sounding off about his stature and accomplishments. One of his loyal fans on Instagram wrote a powerful comment proclaiming him to be the Bob Marley of dancehall and Killer says, “Hands down.”

“King Yellow Man, Beenie Man, Vybz Kartel the current king and one of the dancehall leading bredda, I want to make this clear and very clear, Bounty Killer is the Bob Marley, of Dancehall. There is no DJ on this planet do more for dancehall than Bounty Killer has done. Now this is not up for debate you dig.” 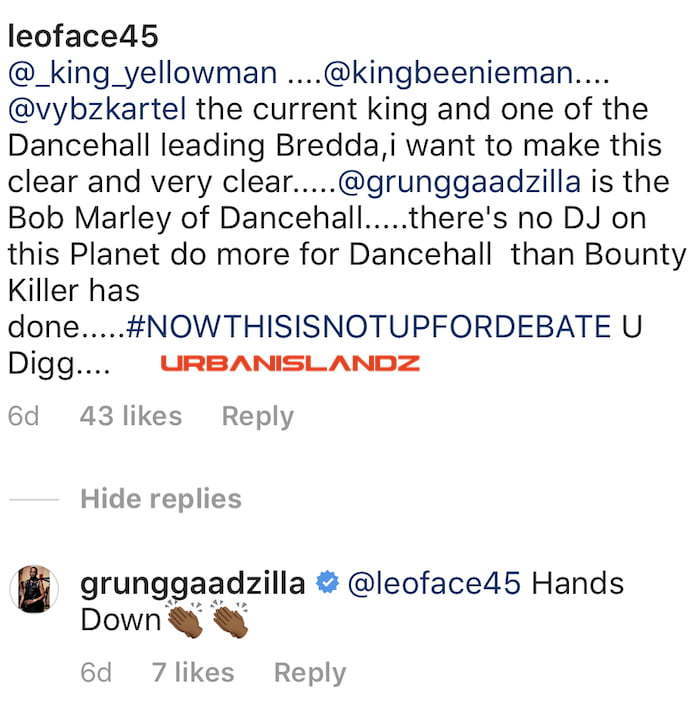 Bounty has a vast amount of crossover hits with artists like Fugees, No Doubt, Busta Rhymes, Mobb Deep, and more. The dancehall legend also brought some of dancehall’s biggest names to the forefront including Elephant Man, Busy Signal, Vybz Kartel, Mavado, and more.

Despite his huge accomplishments and influence within the genre, Bounty Killer often doesn’t get the respect he deserves from the current generation of dancehall artists and even from some of his own. At the moment, he and Mavado are not on speaking terms, and he and Vybz Kartel only recently patched up their relationship after years of beefing.

Do you agree that Bounty Killer is the Bob Marley of dancehall?