50 Cent has finally shared his reaction to his son Tekashi69 becoming a snitch and possibly ratting out 21 Savage.

By now everyone is fully aware that Tekashi 6ix9ine cut a plea deal with the government which will see him providing information and testifying against his fellow Nine Trey gang members who are also facing a mountain of criminal charges. The “FEFE” rapper has been taking a beating on social media since news broke that he is now a government informant, which is something that is frowned upon in hip-hop culture, especially since he built his career on being a gangsta rapper from the streets.

The street is already talking about 21 Savage arrests by ICE officials and linking it to Tekashi69 cutting a plea deal. 50 Cent made a post about it and quickly deleted it. Fifty doesn’t often remove things from his Instagram, so you can tell that he doesn’t feel right about trolling 69 who he developed a close relationship. 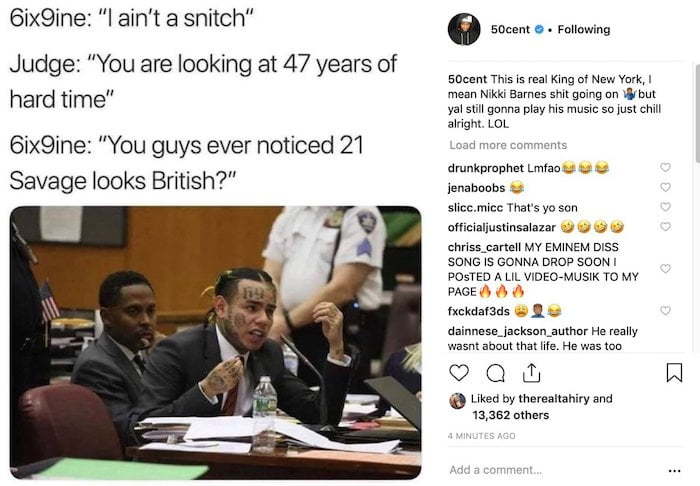 “This is real King of New York, I mean Nikki Barnes sh*t going on but yal still gonna play his music so just chill alright. LOL,” Fifty wrote while sharing a meme making fun of the Brooklyn rapper.