The Game is standing by his controversial lyrics about Kim Kardashian.

The West Coast rapper caught the attention of the hip-hop community when a snippet from one of his upcoming songs hit the net. While this is not the first time that The Game is claiming that he had sex with Kim Kardashian, it is undoubtedly the first time that he is explicitly rapping about it in a song. “I held Kim Kardashian by her throat, ni**a / I made her swallow my kids until she choke, ni**a / I should apologize ’cause ‘Ye my folk, ni**a,” he raps.

The Game responded to the backlash while doubling down saying that he will go ahead and release the song. “I didn’t start rapping to be a nice guy,” he wrote on IG Story. “My fans. Game fans if you don’t like it don’t listen to it. F*** you.” 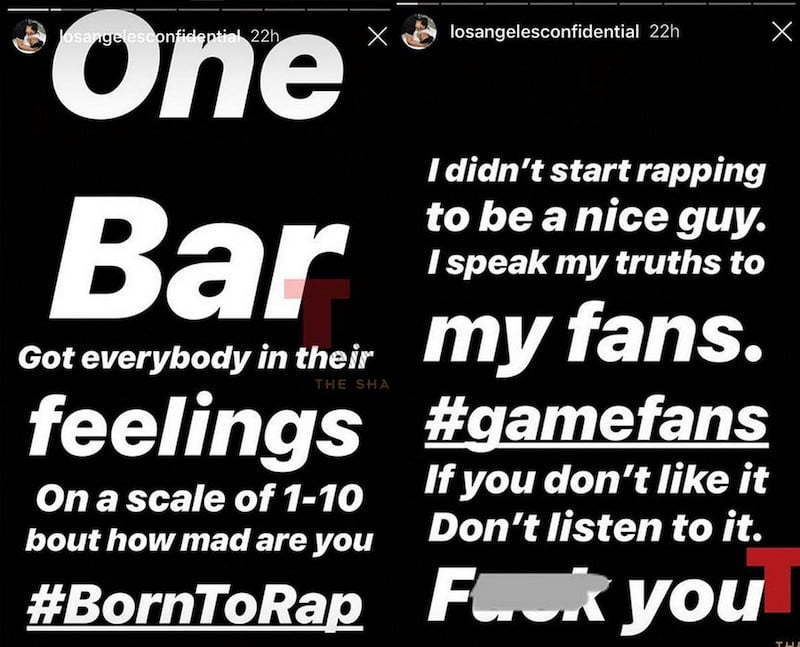 “One bar got everybody in their feelings on a scale of 1-10 bout how mad are you #borntorap,” he continues. The controversial track will appear on The Game’s upcoming album, due sometime this year. New reports are claiming that the rapper was warned by his team and inner circle not to release the song with the Kim Kardashian line, but he refused to budge.

The Game previously raps about Kim Kardashian and Kanye West in his song “Heaven’s Arm” where he threatens anyone who disrespects them. That stance goes contrary to what the Compton rapper is now rapping about.