Did Mavado go to war with Vybz Kartel for his fame?

Bounty Killer continues to drop some dancehall history lesson on us, or at least from his point of view. For the vast majority of us dancehall fans, the infamous Gully/Gaza feud started because Vybz Kartel left the Alliance and started dissing The General, aka Bounty Killer. Mavado then jumps to the defense of his mentor and diss back Kartel, and that gave birth to one of the most fierce rivalries in dancehall’s history.

Bounty Killer saw it much differently saying that Mavado wasn’t defending him from an onslaught from Vybz Kartel and his Gaza crew, but instead, instigate a feud with the now incarcerated deejay because he wanted his fame. Killer may have a point since Kartel was making a name for himself in dancehall in the mid-2000s with a slew of hits.

Back then the Worl’Boss became famous for his lewd and explicit lyrics which sparked some backlash from radio stations who were hesitant to play his music. Nevertheless, dancehall fans, particularly females gravitate towards his lewd music, and the males respected him for his lyricism and flow. 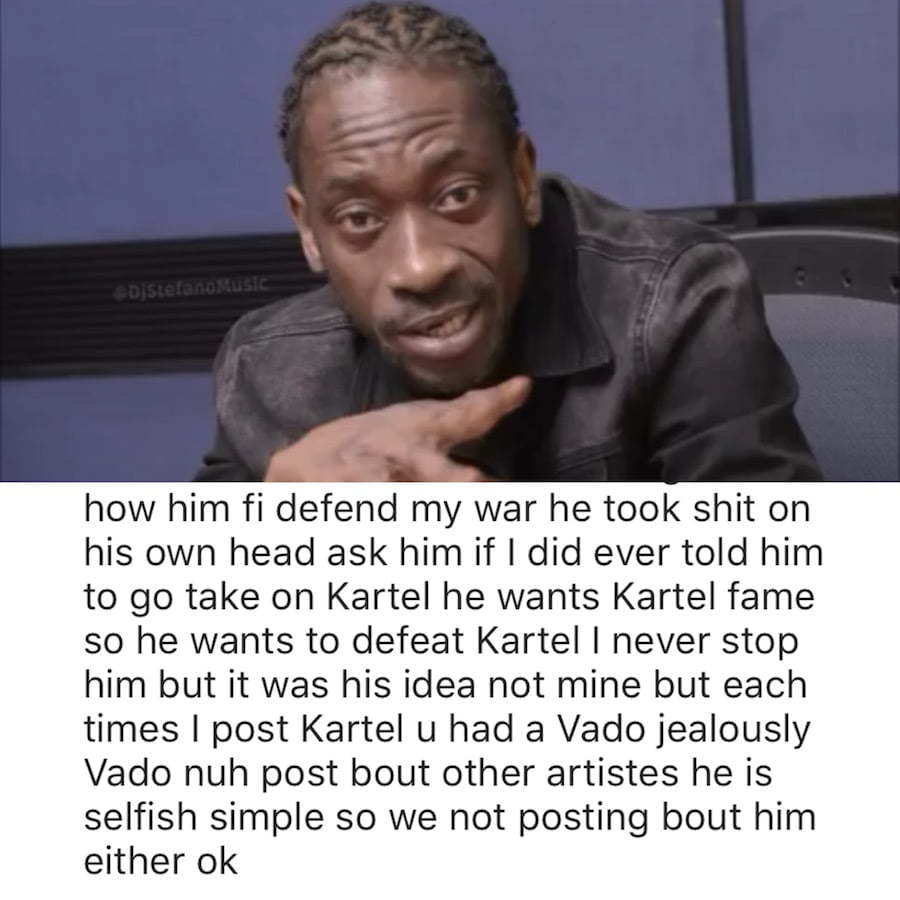 On the other hand, Mavado was also making a name for himself though he and Busy Signal were not as big as Vybz Kartel at the time. During his rant on Instagram last weekend, Bounty Killer said that the Gullyside singer started to war with Vybz Kartel purely out of envy for his fame.

“How him fi defend my war when he took sh*t on his own head,” Bounty said. “Ask him if I ever told him to go take on Kartel he wants Kartel fame so he wants to defeat Kartel I never stop him but it was his idea not mine but each times I post Kartel you had a Vado jealousy.”

The Gully/Gaza war dominated dancehall in the mid-2000s until the government of Jamaica steps in 2009 to call for peace after the feud triggered violence among fans in the streets and schools. Mavado and Vybz Kartel shook hands and called for peace at the time, but that didn’t immediately end the bad blood between the two sides.

Mavado and Vybz Kartel were friends before the Gully/Gaza feud and even collaborated on the single “Happiest Days” which became a huge hit.