Spice is facing widespread criticisms for saying the reason she joined Love and Hip Hop: Atlanta is because she outgrew Jamaica.

VH1 is currently running promos for season seven of Love and Hip Hop: Atlanta and Spice is getting a lot of highlights being the newest cast member and the only dancehall artist on the show. The first clip shows her getting into a fight with another female and the second clip shows her discussing how she outgrew her country and want to broaden her scope into the American market.

One of the criticisms she has been receiving from her Jamaican fans is for her accent. Some folks are complaining about her decision to speak proper English rather than the local Jamaican dialect Patois. Still, that’s not a fair criticism given that her core audience on Love and Hip Hop would have difficulties understanding her. When she said she outgrew Jamaica, she was basically saying that there is no more room for her career to grow inside of Jamaica. So she was clearly misunderstood and some fans take it as she is turning her back on Jamaica, hence the backlash. 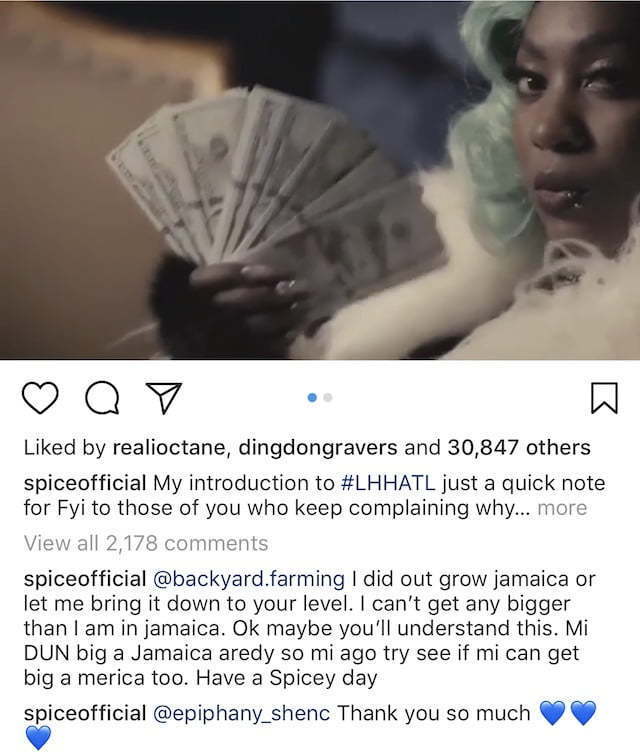 “I did out grow Jamaica or let me bring it down to your level, I can’t get any bigger than I am in Jamaica,” she said on IG. “Ok maybe you’ll understand this. Me done big a Jamaica already so mi ago try see if mi can get big a America too. Have a Spicy day.”

The new season of Love and Hip Hop: Atlanta premieres on Monday at 8 p.m. EST on Vh1.