Iggy Azalea is sharing some breakup advice with her fans and Nick Young probably typed and deleted his response already.

The “Fancy” rapper broke up with the NBA player last year in a bitter split and now we have a good idea how she handled the breakup. Over the weekend, she took to Twitter to share her perfect plan of action for anyone going through a breakup. Her situation might be a lot different than some folks since her ex-boyfriend made a whole human with his baby mama while he was with Iggy, so you can imagine how salty she is.

“If you’re gonna burn someones stuff start with the cheap sh*t and end with the expensive sh*t,” she wrote on Twitter. “Cheap sh*ts more flammable anyway; and then if you take him back mid fight theres less to complain about. Youre welcome. Im a pro.” 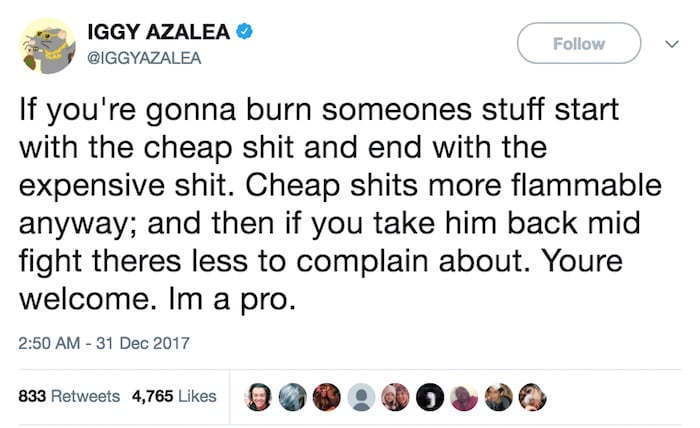 Last year June, Iggy Azalea was spotted moving out all her stuff from Nick Young’s home including taking back her 62 Impala which was hauled off on a wrecker. “Unfortunately although I love Nick and have tried and tried to rebuild my trust in him — it’s become apparent in the last few weeks I am unable to,” she wrote on IG.