Safaree Samuels is on Instagram shooting his shot at Nicki Minaj.

Seems SB wants that old thing back because he spends the greater part of yesterday shooting his shot at his ex-girlfriend on Instagram. On Tuesday, Nicki Minaj released some photos from her Paper Magazine “Break The Internet” shoot and they are steamy. Her ex-boyfriend Safaree couldn’t contain himself and even post the pic on his Instagram and shoot his shot. “Can we please figure something out… these are the kind of pictures I always wanted you to take for me.. Wow.”

Before he made that comment, Safaree posted a pic of himself and quote some recent Nicki Minaj lyrics. “You don’t want smoke w/me this is a laced blunt.. that line hard ni**as can’t front,” he wrote. Those lyrics were taken from Nicki’s verse on Migos new single “Motor Sport” which also features Cardi B. Nicki never respond to Safaree but she did respond to a comment from Nas, prompting some folks in the comment section to laugh at the Love and Hip Hop star. 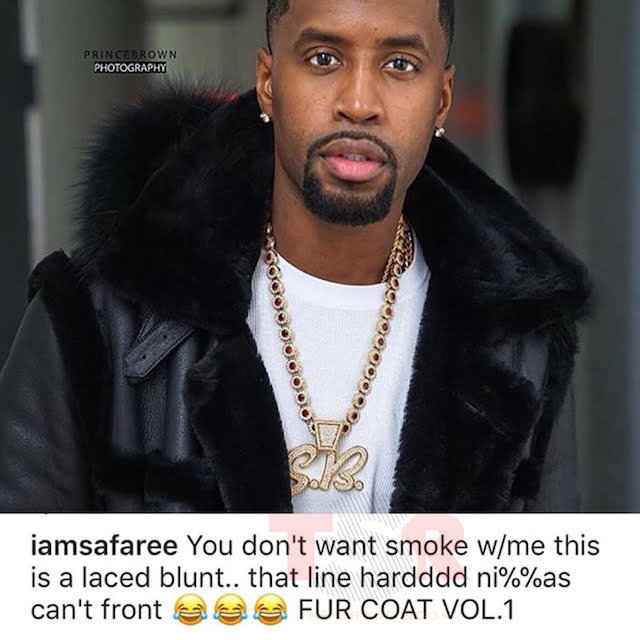 As for the big Nicki Minaj story of the week, the Young Money MC posed semi-nude for her cover photo for Paper Magazine. The pics have been getting a lot of attention since they were released on Instagram. The cover photo alone received close to 2 million likes on Nicki’s Instagram page.

Safaree Samuels and Nicki Minaj dated for 12 years before their split in 2014. The Love and Hip Hop star blamed Meek Mill for their demise, saying in an interview that Meek went and told her that he, Safaree, cheated on her. The breakup was bitter and both of them never seems to fully get over it. Nicki subsequently released an entire album about, The PinkPrint, about their split. She and Meek have since parted ways and now she is rumored to be dating Nas.

#Safaree AND THE REST OF US need answers to this question sis ?? He ain't holding back tuh-day!! Meanwhile #NickiMinaj is out here responding to #Nas & y'all acting up in her comments ?? #StepIntoTheShadeRoom & respond to #Safaree sis ?