Tyga has broken his silence on Kylie Jenner pregnancy news on his SnapChat page.

Kylie Jenner and her new boo Travis Scott are expecting their first child together a baby girl. It’s not clear how many months pregnant is she or if in fact, she is really pregnant, but the news spread like wildfire yesterday after TMZ broke the story. In his first real reaction to the news, Tyga posted a screenshot of the news but quickly deleted it. “Hell nah thats my kid,” he wrote.

Paparazzi also caught up with the Compton rapper in Los Angeles yesterday and antagonized him with questions about Kylie Jenner’s pregnancy, but he never bites, he kept his cool and remain silent. You have to give him credit for that because you could see how uncomfortable he was with the barrage of questions about his ex-girlfriend expecting a baby with another rapper who is signed to the same label he is signed to, G.O.O.D. Music.

Tyga dated Kylie Jenner for a few years since she was 17 years old and he was 25 at the time. They went public with their relationship after her 18th birthday, but fast forward to April of this year, the couple decided to break up and go their separate ways. Kylie rebound with G.O.O.D. Music rapper Travis Scott, who is also a close friend of Kanye West. It didn’t take too long for Scott to knock her up, so perhaps Tyga is having some regrets now thinking that he should’ve done the deed. 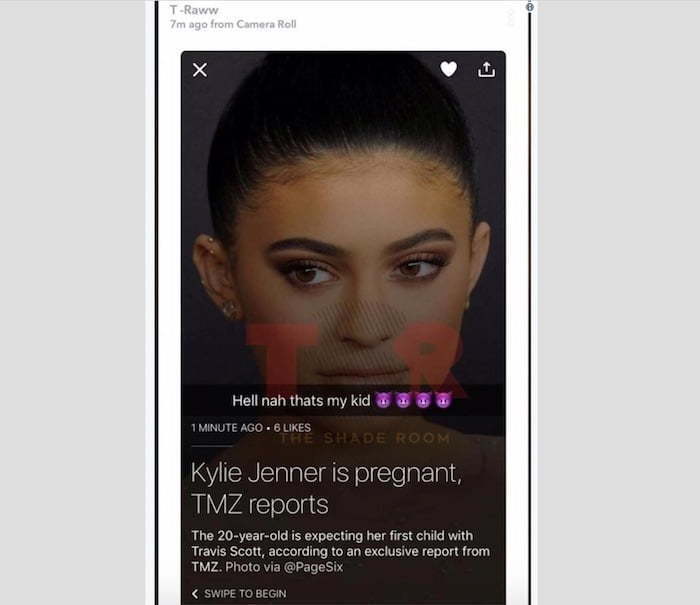 During the summer Tyga did an interview with Big Boy where he revealed that his career was being overshadowed by being associated with the Kardashian/Jenner brand. He also said that his fan base is made up of mostly female so the breakup will benefit his career more and will help him to be more focused on his music. On another note, congratulations to LaFlare he is about to become a dad.