The Game manager Wack 100 has stepped forward to clear up some recent comments that he made about Tupac Shakur not being a gangsta.

In a comment posted on Instagram earlier this week, Wack 100 says that not only wasn’t Tupac a real gangsta, but he would often changed to adjust to whatever the reality around him is at the time. Still the well connected West Coast entertainment personality says that he is still a big fan of one of the greatest rappers of all time. Tupac fans weren’t happy about the comments. 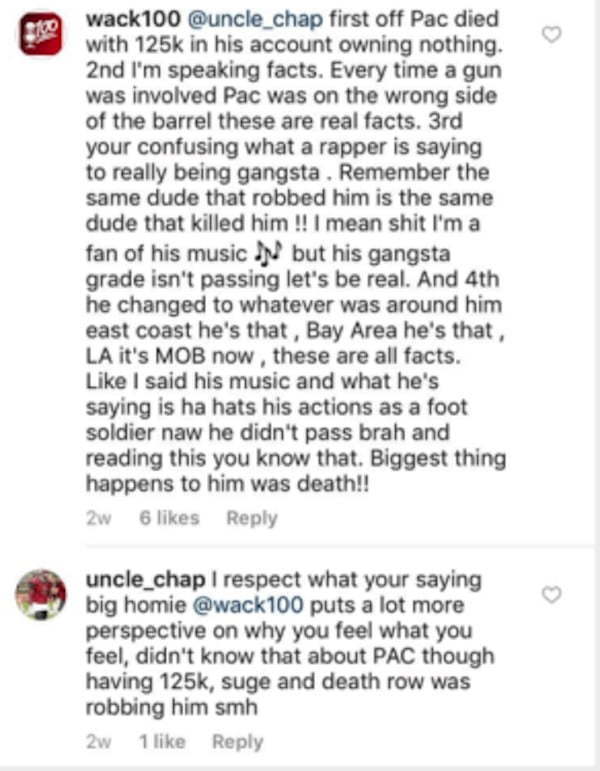 In his defense, Wack 100 says Tupac was more like a revolutionary guy. “Now listen everybody is upset because I said Tupac wasn’t a gangsta,” he said in a video posted on his IG account. “Let me repeat myself. I’m a Tupac fan; I bought all of his music. Know half of his music bar-for-bar. Tupac wasn’t no gangsta. He had ganstas around him. Pac was a revolutionary type guy. On some real sh*t I don’t know why y’all mad talking bout I’m disrespecting him. It is what it is……He wasn’t a gangsta. He didn’t shoot two police. He shot at two white people who he later learned were off-duty police… I stand by what I say. He wasn’t a gangsta; he was a revolutionary.”