Chris Brown is still trolling Karrueche Tran on social media and he is making sure that no other celebrities gets a piece of her cakes.

Perhaps Karrueche still has a stronghold on Breezy’s heart. The actress posted a racy photo of herself in a tiny bikini on IG on Thursday that she captioned, “Vitamin D #ittybittycommittee.”

Marques Houston apparently couldn’t contain himself and left a thirsty comment on the pic.

“@Karrueche Dizayum look at all that booty, can’t even see your face cuz that booty in the way,” Houston wrote in the comments along with a few laughing emojis.

Seems Chris Brown spotted the comments on IG and also typed in the comments section “Go home Rodger.” That was a famous line from Marques Houston days on the 1990s TV sitcom Sister Sister.

BallerAlert got a screen grab of the exchange before Chris Brown deleted the comment.

Karrueche Tran dump Chris Brown earlier this year after she found out that he fathered a love child name Royalty with video model Nia Guzman. 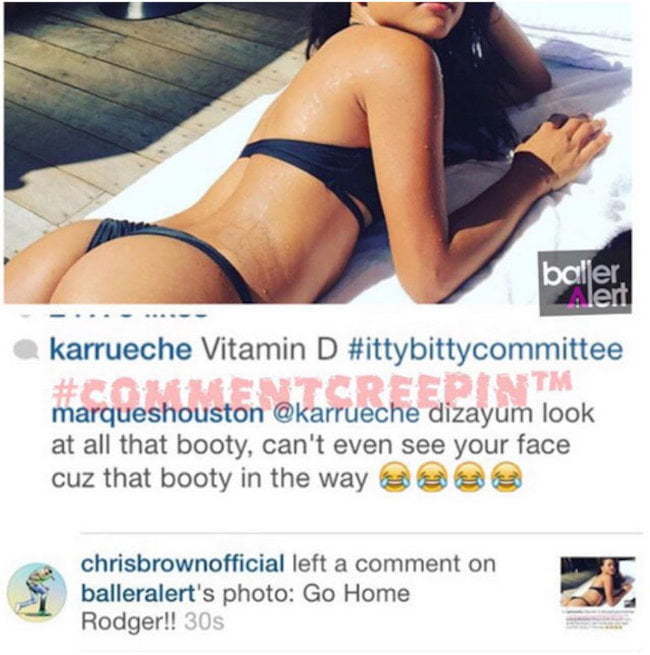 Sources connected to the former couple told us that they have not spoken to each other in months.

“There are zero communications between them for months now even though Chris and his friends tried to reach out to her,” sources told Urban Islandz. “It’s pretty clear that he needs to move on because she is moving on and is over the drama.”

Back in May Brown got into a heated beef with Tyson Beckford for getting too close to his old girl. The model was partying with Karrueche in Vegas when they snapped a photo together that he posted on his Instagram page.

This makes it very clear that Chris Brown is not over his ex-girlfriend.