Marion “Suge” Knight was arrested and charged with murder following a deadly hit and run in Compton, California on Thursday.

TMZ was the first to report the incident that took place on a film set involving Ice Cube and Dr. Dre.

Eyewitnesses say Suge Knight drove up to the movie set on Thursday afternoon but was asked to leave by security. he then got into an argument with two men and that incident escalated.

Reports are that he jumped into his car and backed up into the men he had the argument with. One man was ran over and later died from his injuries. Cops say the car ran over the victim twice before it sped away with Knight behind the wheels. 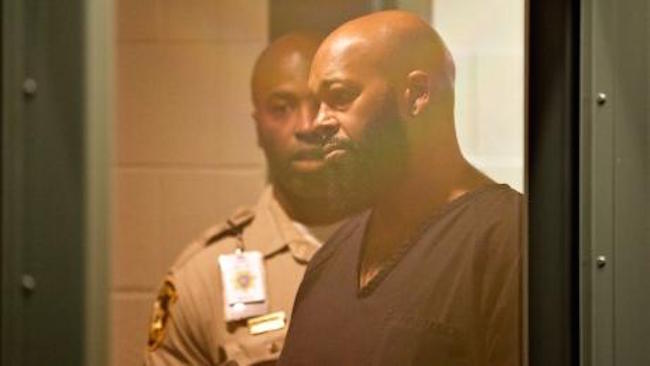 The dead man has been identified as Terry Carter, a friend of Suge Knight who arrived on the scene with him. Two other men including actor Cle “Bone” Sloane were hit but sustained non life threatening injuries.

Cops later put out an arrest warrant for Suge Knight who later turned himself in to police.

Suge Knight lawyer, James Blatt, says his client was afraid for his life and in his attempt to speed away from the scene he accidentally hit and killed his friend.

Blatt told his client to surrender to the Sheriff department.

At minutes before 3 AM on Friday, Suge Knight surrendered to cops. He was taken into custody and after interrogations he was charged with murder.

Cops later found his truck abandoned in a parking lot. According to police officers, the former Death Row Records head was involved in two fights before committing the crime.

One of the men he hit was involved in one of the fights with Knight. Eyewitnesses say he backed up his car twice with the intentions to run over the men.