With very limited details available, Rihanna 8th album is already garnering a lot of hype from her fans on social media.

Last month Urban Islandz exclusively told you that Rihanna’s new album is coming possibly on November 25. The Bajan pop star is also planning to drop a new single ahead of the album release.

SEE ALSO: Did Rihanna And Chris Brown Secretly Hooked Up This Week?

The image contain an alleged tracklisting which revealed collaborations from Nicki Minaj, Drake, and Big Sean.

So far there are no confirmation from Rihanna or her label about her pending release. All these new details are from anonymous sources.

Rihanna fans have grown accustom to getting a new album every year but they have been left hungry for new music since 2012. 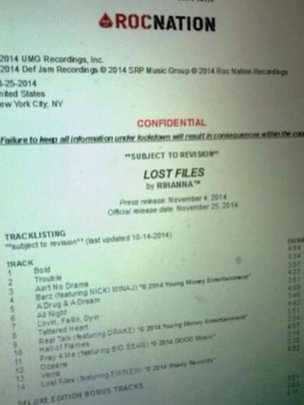