. ..
On Saturday Jamaican bid one final farewell to the late legendary Gregory Isaacs.

On Friday scores of Jamaicans came out to the National Arena to get a glimpse of the Cool Ruler of Reggae music, laying peacefully in his casket. Many broke down in tears, while some had much praise for the late iconic Reggae superstar.

Later that night family, friends and fans of Gregory Isaacs gathered at the Ranny Williams Entertainment Centre in Kingston for a musical tribute to the late singer.

For many this was to be the traditional ‘Nine Night’ or ‘Set Up’, however, what reggae music lovers got was an impromptu stage show featuring a heady list of the music’s heavyweights.

All paying tributes to The Cool Ruler, the artistes gave the large appreciative audience quite a show.

Some of the acts which made it to the stage included members of Home T, Big Youth, Beres Hammond, Queen Ifrica, Bunny Wailer, Tony Rebel, The Colonel Josey Wales and Freddie McGregor.

Saturday was the final day fans, friends and family members got to see Isaacs before sending him off to his final resting place. It was extremely hard for many, as family members and friends alike constantly broke down in tears.

The first hour of the four-and-a-half-hour thanksgiving service was dedicated to musical tributes to Isaacs.

Backed by Lloyd Parks and We the People Band, artistes, some of them Isaacs’ contemporaries, delivered stirring performances, at times performing the late singer’s signature pieces.

The highlight of this segment was perhaps diamond-selling reggae act Shaggy, who brought the house down from the moment he stepped on stage. Wearing one of Gregory Isaacs’ trademark hats jauntily perched atop his head, Shaggy mimicked the artiste’s stage presence, ‘swagger’ and voice, belting Isaacs’ Don’t Want to be Lonely Tonight. This sent cameras flashing and created quite a buzz. Shaggy then noted that Isaacs was the first artiste to put him on stage in Japan, back in 1993, and for that he paid his respects. 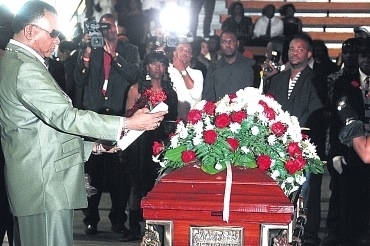 Several family members and dignitaries gave tributes to Isaacs who passed away on October 25th in London after a long battle with cancer.

Pastor Franz Fletcher, in exhalting Isaacs’ enormous musical talent, admitted that, “Although I am the pastor of Church On The Rock, I do find time to listen to Gregory, and he’s alright.”

The Minister of Culture, Olivia ‘Babsy’ Grange declared: “Gregory will be forever remembered as one of the great heroes of Jamaican music. He was forever the Cool Ruler, easy on the ears, easy on the eyes, a brilliant vocalist, a focused artiste. Today, we say goodbye to one of the heroes. One who not only believed in his talent as an artiste and producer, but also believe in the culture which generated it. One who believed in his country.”

Opposition spokesman on finance, Dr Omar Davies noted that Isaacs’ music conveys messages about man-woman relationships in a way that very few could. The former minister of finance evoked laughter when he said, “Consider, for example, the tune Top Ten. Who else would be brave enough to say — “She is not in my top ten but she is still on my chart.”

Daughter of the late reggae icon Morieka Isaacs described her father as someone who was well loved by everyone. “My father was not only loved by his fans but by everyone who knew him. He was very industrious as it relates to caring for his family and delivering the music that everyone enjoyed and loved.”