Rihanna and A$AP Rocky shows some PDA as they arrived in Barbados while Amina Muaddi addresses breakup rumors that alleged she was the cause.

Amina Muaddi is pouring cold water on claims that she slept with A$AP Rocky leading to Rihanna breaking up with the rapper.

Muaddi called the claims “fake gossip” as she addressed the cruel rumor that a pregnant Rihanna broke up with Rocky over the alleged cheating.

Neither Rihanna nor A$AP Rocky has addressed the scandal, which began with a so-called fashion influencer making the claims on Twitter and naming Muaddi as the woman at the center of the alleged cheating scandal.

The rumors went viral after the posts, as many speculated on whether it was true or false.

Muaddi is a designer for Fenty Footwear, Rihanna’s fashion line, and she has also worked with A$AP Rocky in his own line.

The Romanian designer on Friday dismissed the rumors in a lengthy statement posted to her Instagram Stories.

“I’ve always believed that an unfounded lie spread on social media doesn’t deserve any response or clarification, especially one that is so vile,” Amina Muaddi stated. “I initially assumed that this fake gossip — fabricated with such malicious intent — would not be taken seriously.” 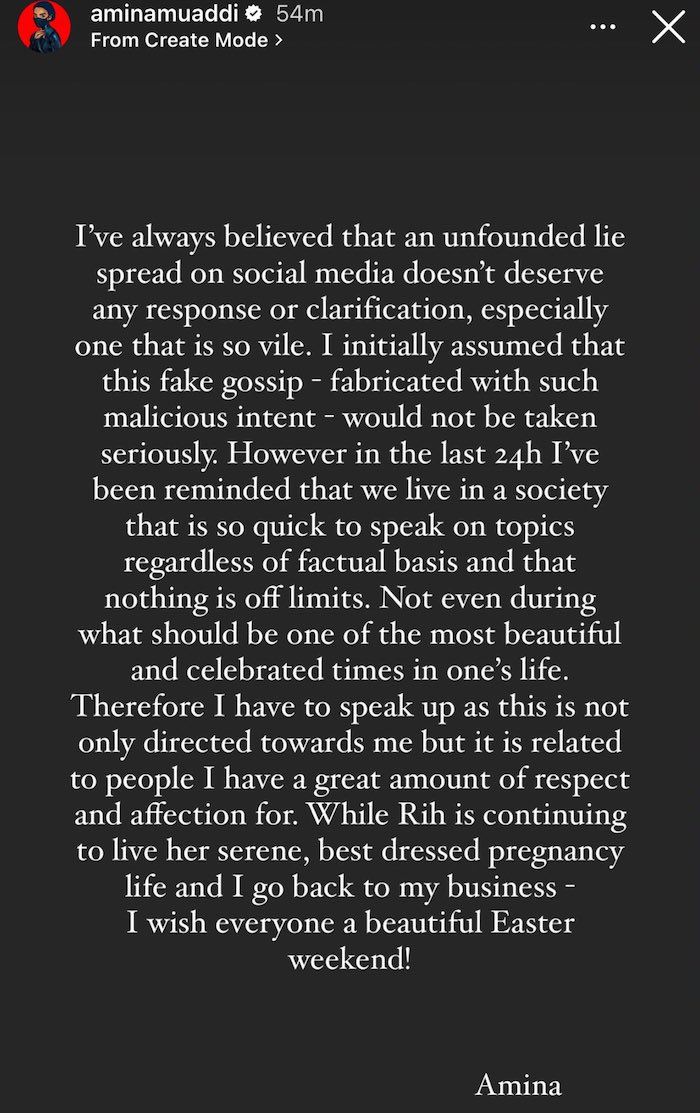 “While Rih is continuing to live her serene, best dressed pregnancy life and I go back to my business – I wish everyone a beautiful Easter weekend!” she concluded her post.

The Fashion influencer initially said on Twitter that “Rihanna broke up with him after she caught him cheating with shoe designer Amina Muaddi, ASAP & Amina is not new though as she was seeing him years ago and also collaborated with him on a collection of shoes,” the tweets read.

The influencer who started the rumor has since retracted the claim on Twitter. “Last night I made a dumb decision to tweet some information I had received,” Louis Pisano wrote. “I’m not going to talk about sources, blame others for a discussion that was started, etc because at the end of the day I made the decision to draft that tweet, press send and put that out with my name on it.”

In the meantime, Rihanna and A$AP Rocky are currently in Barbados as she prepares to give birth in her homeland where she was recently named a National Hero.