The back and forth between Marion Hall, also known as Lady Saw and Spice, has intensified with others joining the conversation and calling out Hall for her behavior towards other artists in the past.

Between Friday and Saturday morning, Tanya Stephens and Macka Diamond both jumped into the fracas as they defended Spice and Shenseea, who Hall earlier criticized.

Stephens on Instagram said that Hall had tried to force her out of the business after she terrorized fellow deejay Lady G who she saw as a competitor.

Macka Diamond also called out Hall, claiming that Spice’s accounts of the issues they had were true and that Lady Saw was awful to Spice as well as Lady G and herself. According to Macka, Lady Saw had bullied her and ordered her to leave the business as she claimed Macka was too old to make money and get bookings. The deejay said she had been talking to more than 20 promoters just this week about performances as she learned to pivot and use her growing old as an artist to her advantage.

Macka Diamond, who advised Hall that there would be no issues if she wanted to return to dancehall should she ever change her mind about leaving, also said that Hall had no right to be policing others if she made a choice about her own life.

In the meantime, Hall did not take kindly to the discussions about her, and even though she started the drama with Spice and She sera, she claimed that others were pulling her back into sin.

She added that she was being baited to return to dancehall.

“There’s one of three words that defines the kind of woman i am. One is.Tacky!!!!!.The other is Trashy!!!!!. And the third one is Classy !!!!!!. The way I choose to behave myself,concerning this skillfully orchestrated plan of the devils, attempt to draw me back into where God has taken out of. Will be what determine who I am in Christ,and what you, who are so excitingly waiting on me to bite the bait, will see from this day moving forward.When God breath upon man to write Deuteronomy 28 verse 13. He did so with me on his mind. He and his offsprings will never pull me back to that place of shame. God was merciful to wash me in his cleansing blood, and upgrade me to the upper room,” she said in a post on Instagram.

Marion Hall said that her former life was controlled by the devil, and she won’t be returning.

“take up your dirty bundles, and keep it moving. It reads. And the lord shall make you the the head, ;and not the tail .and thou shall be above only, and thou shall not be beneath;if that thou hearken unto the commandments of the LORD thy God which I commanded thee this day, to observe and do them. I can lead a cow to the water, but I can force him to drink it. I can tell persons about salvation in Christ. But I can’t give salvation. The devil has used me in the passed to adopted to tacky, and trashy,and that is why I walked away from that tasteless position I once hold.” 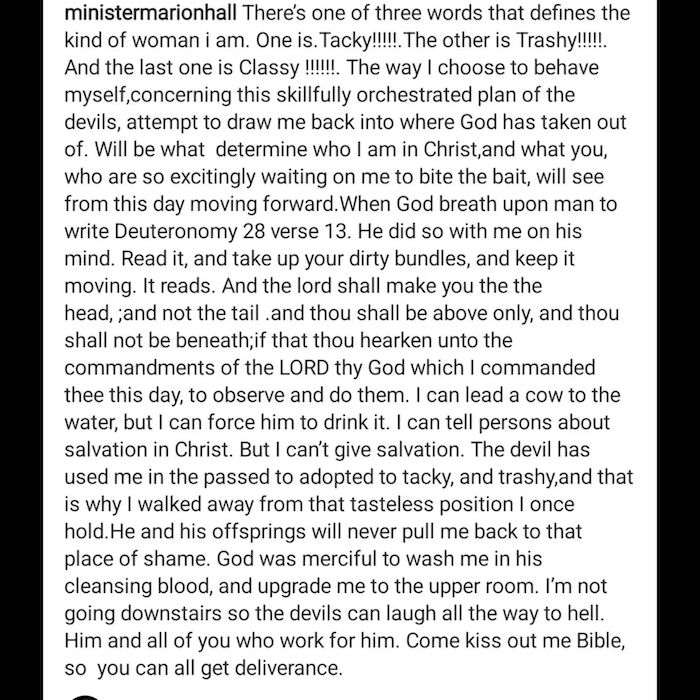 Meanwhile, Hall had a remodeled curse off for the lot who were criticizing her.

“I’m not going downstairs so the devils can laugh all the way to hell. Him and all of you who work for him. Come kiss out me Bible, so you can all get deliverance,” she said.