The R&B singer on Thursday night denied that he drugged and raped a woman last year while at a party at Diddy’s house. On Thursday, TMZ reported that the singer was being sued for $20 million by a woman who claims that he invited her to the party, gave her mixed drinks, which made her disoriented then had non-consensual sex with her.

“I HOPE YALL SEE THIS PATTERN OF [cap] whenever I’m releasing music or projects, “THEY” try to pull some real bullshit,” he posted on his Instagram Stories.

According to the lawsuit filed by a woman who is referred to as Jane Doe, she was allegedly raped by Chris Brown on a yacht that was parked at Diddy‘s Star Island home in 2020.

According to TMZ, the woman identifies herself as a “professional choreographer, dancer, model, and musical artist”. In her filing, she describes the encounter as the singer going from friendly to rapist within minutes after they met.

According to her, she was on Facetime with a friend who was with Chris Brown while at the party, and he grabbed the friend’s phone and told her to come to the Star Island home on December 30, 2020.

She said when she got there, the singer offered her a mixed drink, and by the time she had a second drink, she felt “a sudden, unexplained change in consciousness”, which left her feeling “disoriented, physically unstable, and started to fall in and out of sleep”.

She said after this, the singer took her to a bedroom while she was “drugged” and “half-asleep,” and he closed the bedroom door behind them while physically barring her from leaving. She went on to say that he removed her bikini bottom and started kissing her despite her protests to stop. The document details that the singer ignored her pleas and proceeded to rape her.

Meanwhile, other men in hip hop are jumping to the defense of Brown.

Among those who spoke out against the accusation is Tory Lanez, who shared a message online.

“THEY REALLY NEED TO LEAVE MY DAWG @CHRISBROWNOFFICIAL ALONE AND JUST LET HIM BE GREAT !!!! … EVERY TIME HE GOT SOME GOOD SH * T GOING ON … OR HE STARTS AN ALBUM ROLLOUT … HERE COME SOMEBODY WITH SOME FAKE SH * T TO DRAG HIM DOWN !!!!! I’VE [LITERALLY] SEEN THE MAN BE NOTING BUT NICE AS F * CK TO HIS FANS AND PEERS !!! LET THE GOAT BE THE GOAT …” he said on Instagram Stories. 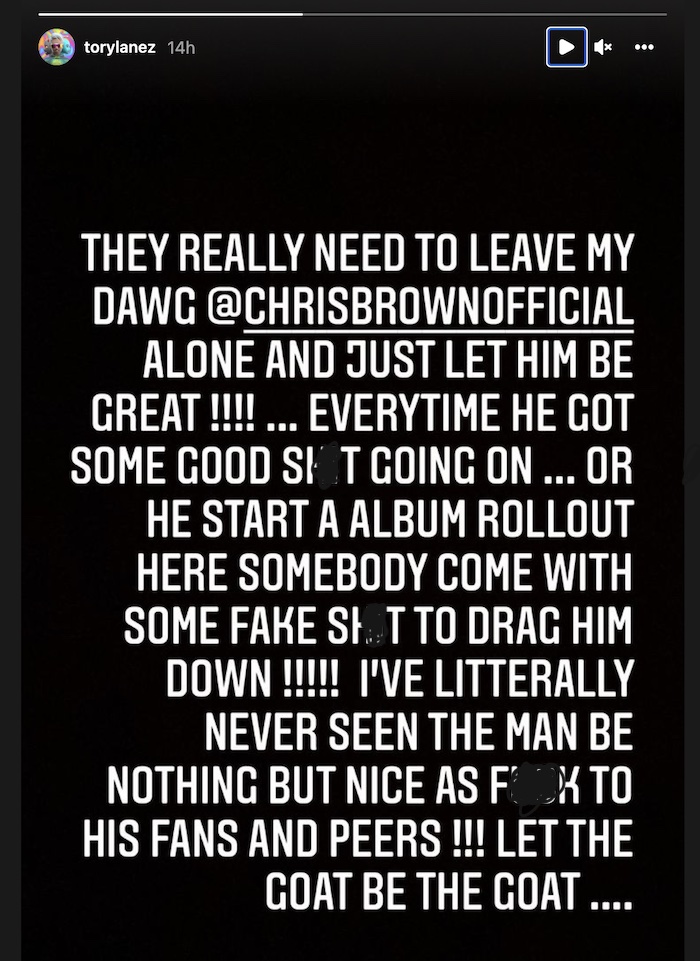 Brown recently announced the arrival of his 10th studio album ‘Breezy’ in December 2021. The album is scheduled to be released later this year, and the singer dropped the first single, “Iffy,” as he signaled the arrival of music that will be catered to the women.