Many track and field fans have felt sorry for Sha’Carri Richardson after she failed to live up to her promises of winning or medaling against Jamaican sprinters Elaine Thompson Herah, who holds an Olympic World Record for the women’s 100 meters, Shelly-ann Fraser-Pryce, and Shericka Jackson.

Jamaicans, on the other hand, were gleeful that the American sprinter lost since she had hyped up her ability to win the race. The Jamaicans’ track and field dominance was widely shared online by Jamaicans, who also poked fun at Richardson for failing to back up her big talk online.

Over the last few days, many track and field fans shared their shock and surprise online that Richardson came last in the women’s 100 meters at the Prefontaine Classic held in the United States. The event was her first race after a one-month suspension from the sport, which resulted in her absence from the Olympics after she tested positive for weed, a banned substance.

Richardson herself was defiant after losing as she told NBC that she was not done and the winners of the race haven’t seen the last of her. She later pulled out of the women’s 200 meters race without an explanation.

The NBC video of Richardson ranting has been shared widely online with persons trolling her. However, some came in defense of the runner, who they said others were brought down as a black queen.

However, Richardson is being called out on Monday after she liked tweets shading Shelly-ann Fraser Pryce that compared her looks to Lil Wayne. 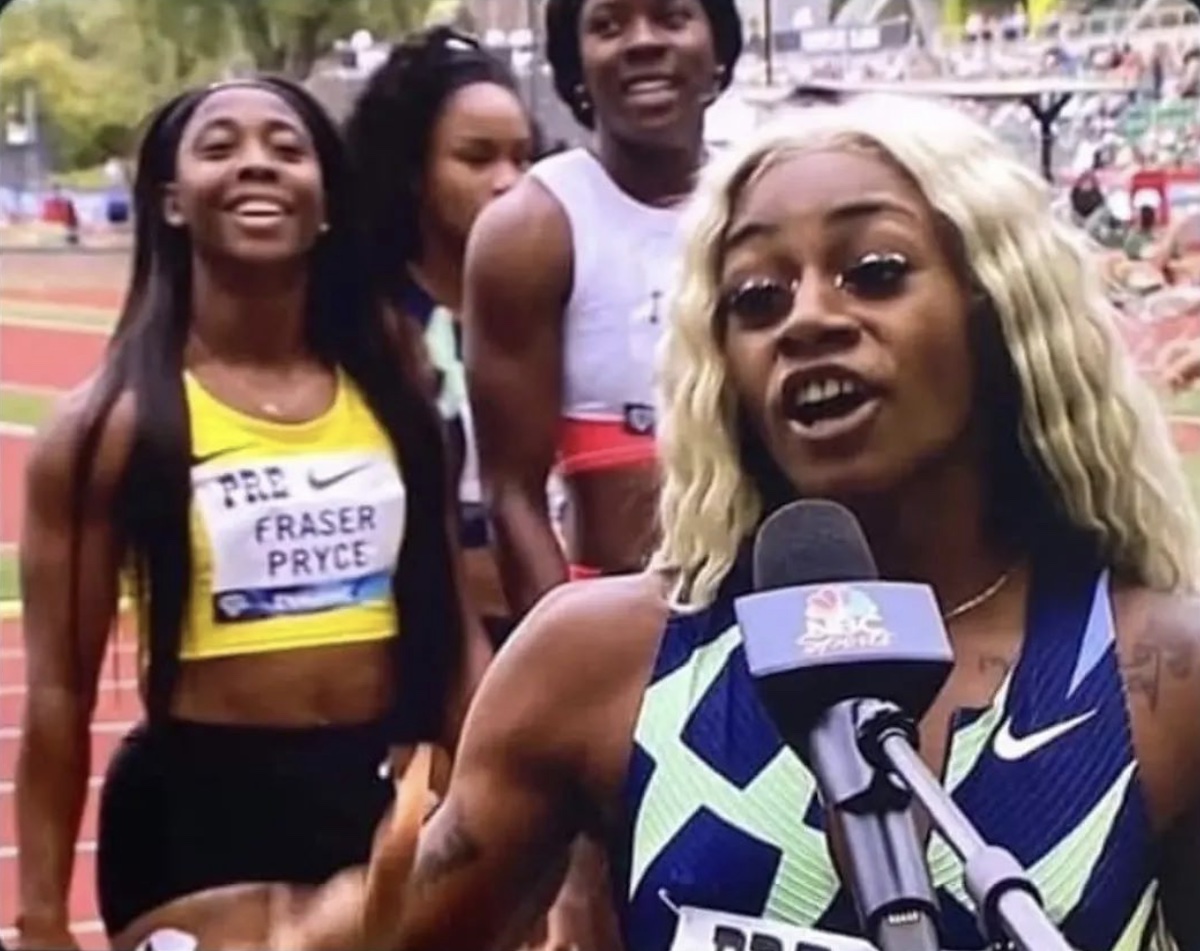 Following her embarrassing performance of 11.14, Richardson took on Twitter as she passively-aggressively reacted to the races that saw Fraser-Pryce coming in second place behind Thompson-Herah, who won with a new National Record with a time of 10.54 seconds.

Richardson reacted by liking tweets that shaded Fraser-Pryce, by comparing her to rapper Lil Wayne in terms of her physical appearance.

A Twitter user shared the NBC video of Richardson’s interview in which Fraser-Pryce unintentionally video bombed her. “Look at they face love,” the Twitter user captioned the video, which showed Shelly with a smug smile walking past.

The American track and field star “liked” the fans’ post on Twitter which has led to an uproar from fans of Jamaican sprinter Fraser-Pryce online. 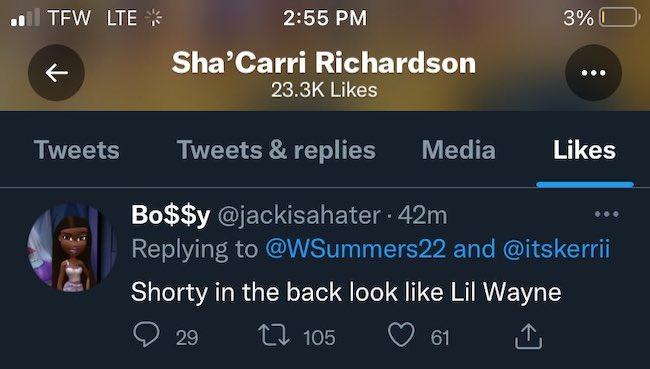 “Everyone gotta uplift black women except Sha’Carri who is liking disrespectful tweets about one of the Goats Shelly Ann Fraser [Pryce’s] appearance,” one fan said about Richardson’s behavior.

Other fans roasted Richardson as a “weed smoking runner with rainbow hair.”

Other fans had some choice words for Richardson, whose Twitter handle is @itskerriii – “first of all …yall can’t disrespect shelly… in her entire career she has never placed 9th in a race…. @it’skerrii s*** yuh mada…you should’ve let your mouth and fingers run for you in the race I think they would place something else other from 9th,” another Jamaican fan said.

Others explained why persons were embarrassed for Richardson and her failure to perform. “That she placed last isn’t the issue. Her arrogance, disdain and disrespect is. When you wanna trash talk and claim top gun status you better be able to deliver when the rubber hits the road or face ridicule.”

“People out her typing think pieces about how badly Sha’carri is being treated. She disrespected and diminished the accomplishments of several black women. She liked disrespectful tweets likening Shelly Ann to Lil Wayne. She disrespects her OWN teammates. Please – exit stage left,” another Twitter user told Richardson.

So Sha’Carri liked a tweet comparing Shelly-Ann Fraser-Pryce to Lil Wayne in terms of looks. I actually felt a bit of sympathy for her when I saw the memes and the comments from Jamaicans. Not anymore. This is trash-tier, just like her running.

Could never be her you comparing to Lil Wayne @itskerrii pic.twitter.com/i7yJynEuOH

People out her typing think pieces about how badly Sha’carri is being treated. She disrespected and diminished the accomplishments of several black women. She liked disrespectful tweets likening Shelly Ann to Lil Wayne. She disrespects her OWN teammates. Please – exit stage left.

Yes, and it was about one of the Jamaican women who beat her, Shelly-Ann Fraser-Pryce. They were talking about her being ugly and compared her to lil Wayne and shacarri liked the lil Wayne tweet but unliked it like an hour later

Whilst Sha’carri is liking posts saying Shelly Ann looks like lil Wayne. This was what Shelly Ann was doing at 21 ?

???I’ll triple your whole year salary if you can ? https://t.co/jJ8udedMuS