Rihanna’s music videos are off limits for her niece, Majesty, and now so is YouTube, at least until she grows up some more.

The Bajan pop star shared a clip showing the moment she busted her niece taking a peek on the video sharing platform. Majesty, sitting around a desk on her tablet, was blasting Calvin Harris’ 2016 hit single “This Is What You Came For” featuring Rihanna. “Who’s getting banned from YouTube?” RiRi asked her while pointing a finger at her niece.

Interestingly, after taking the tablet from Majesty, Rihanna noticed that she had already viewed several of her classics. It’s safe to say that Maje was having a RiRi binge session.

“And on that note…Siri you could catch these hands!” RiRi captioned the video. What’s very clear though is that Majesty want new music from her aunt just like the rest of us.

While fans found the video hilarious and embarrassing for Majesty, others expressed disbelief in how much the child has grown. It seems like only yesterday that Maje was a baby, and now she’s all growing up right before our eyes. Majesty celebrated her 7th birthday this year.

“How and when did Majesty get this BIG?!” one person asked.

and on that note…Siri you could catch these hands! pic.twitter.com/qjpvaLLBAN

Majesty wants new music. I don't blame her. We all do! pic.twitter.com/9QUoQWRB8k

She just wants you to release the album like we do? pic.twitter.com/0r8nZGeNDW

While Rihanna is not yet a mother, the fashion icon has been playing an active aunt and mother figure role in Majesty’s life since her birth. Maje is the daughter of her cousin Noella Alstrom.

Since Noella and Rihanna consider themselves sisters, Rihanna maintains that little Majesty is her niece.

Some fans, though, did not miss the opportunity to comment on Rihanna’s singing in the video, lamenting that this will probably be the only singing they will get from the R&B star as they await her oft-delayed album, R9.

“This is the closest to Rihanna ever singing for us again,” one user said, while another added, “She wants you to release something new too bestie.”

Rihanna has been teasing fans with new music for quite some time. While many are still waiting anxiously, others are convinced that the Barbadian singer has given up on music in favor of entrepreneurship. 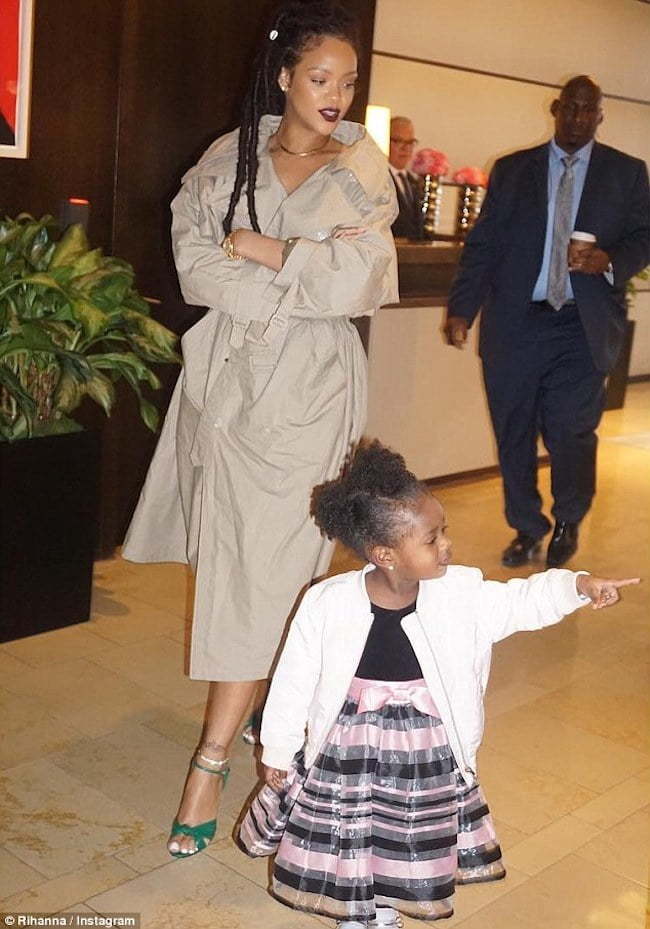 Rihanna recently became the richest woman in music after Forbes named her their latest billionaire in the entertainment industry, with an estimated wealth of $1.6 billion. She is now the second richest female in entertainment, as Oprah Winfrey leads that pack.

Some fans take this as their cue that RiRi is unlikely to return to music since she is making so much money from her fashion and makeup lines.

It is still uncertain if new music from Rihanna will hit the entertainment industry anytime soon, but the singer seems quite comfortable with her current position in her life.

Even as she continues to strive and ‘secure the bag,’ the 33-year-old is still spending quality time with family, friends, and bae, A$AP Rocky, as they are being spotted on dates quite frequently these days.