Popcaan has reacted to new photos of Vybz Kartel in prison amid the incarcerated deejay’s exclusive TV interview with Fox 5 New York.

Over the last decade that the dancehall superstar has been incarcerated, his fans haven’t gotten many glimpses at new images of him. While the occasional picture may pop up online after the deejay gets a visit from his famous family or friends, the rare occurrence continues to be a well sought-after event.

After giving a new exclusive interview to Lisa Evers of Fox 5 New York, Vybz Kartel was featured in never-before-seen photos that aired during the program. The reporter also posted them on social media as a preview of part one of her two-part interview with him. In the post, Vybz Kartel, for the most part, looks healthy, though it’s not always an accurate judgment to make based on one’s physical appearance. The deejay has gained some weight and is rocking a short natural loc look.

His tattoos are on full display in the shirtless photo where he stands nonchalantly in front of a makeshift clothesline and grilled windows with his thumbs in his pocket. He donned skinny jeans and a fresh pair of blue and white Jordan 13 sneakers. While his current image is not one that fans are used to, most of them are just glad to get a fresh look at the incarcerated deejay. Some, however, are in disbelief that the deejay has changed as much as he has physically. “Ano vybz kartel that mi g,” one fan commented.

Others took to the comment section to campaign for Vybz Kartel’s freedom which they believe is long overdue. In his Fox 5 interview, the deejay spoke candidly about his belief that his incarceration was a part of a larger conspiracy to get him off the streets because of the strong influence he has over the youth and civilians as a whole. 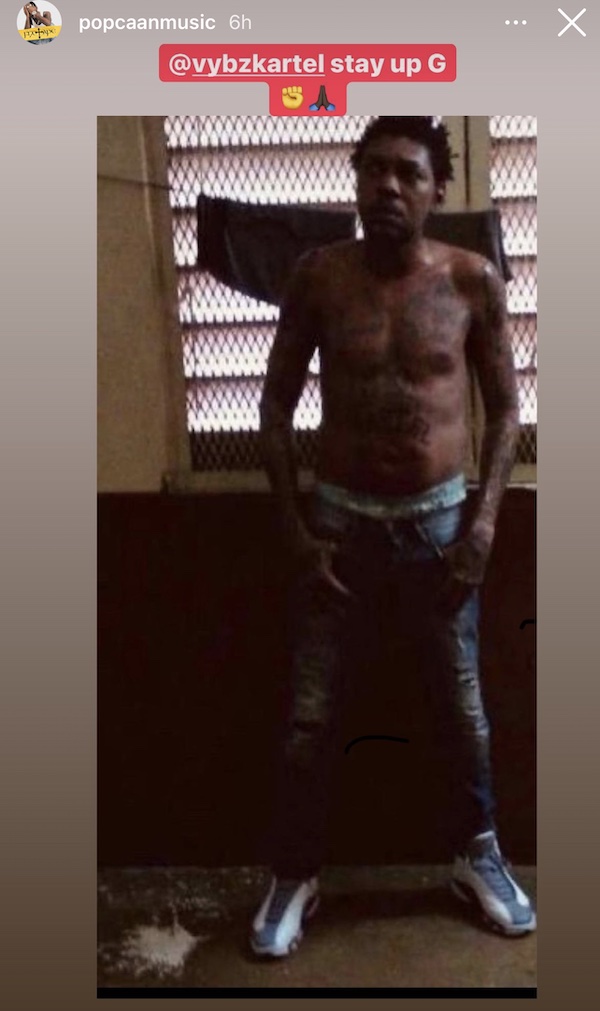 While he admitted that he was sick for a few years, the dancehall star says he is not worried about his health as he is better now and is more focused on getting out, a bid he remains unwaveringly confident in. “I’m basically just thinking about going home now because everything is drawing to a close, so I’m not really worried about my health as much, I’m doing much better you know… so it’s all good,” Kartel said.

What are your thoughts on these latest photos of Vybz Kartel?