42 Dugg is sorry about his homophobic rant following an avalanche of backlash.

The Detroit rapper issued an apology for his previous rant that many social media users labeled as homophobic. 42 Dugg has sparked conversations over the last few days after posting a video of himself and his son, who is celebrating his 3rd birthday. Sadly, the posts did not sit well with the public.

One video captured on an airplane sparked outrage as it showed the rapper kissing and licking his son’s neck. While many social media users found the viral video troubling, others found it severely inappropriate and threatened to call Child Protective Services.

An angered 42 Dugg took to social media to clap back at naysayers, but apparently only digging a deeper hole for himself. On his Instagram story, the rapper ranted, “Ain’t nobody going for that gay as* ho* as* sh*t y’all on.”

The “Free Dem Boys” rapper, of course, received major criticisms for seemingly rubbing salt in the wound. On Sunday, August 1, in an effort to right his wrongs, the rapper apologized for his rant, claiming he was angry and did not mean to offend anyone. “It never be my intentions to offend anybody even when I’m offended so for that I am sorry,” he expressed.

The rapper, noting that he usually keeps personal things to himself, added that he will no longer be posting his son or family and stick to solely music-related content.

“Usually I’m Ah very private person when it come to personal sh*t such as my son or my family in general people always tell me I need to take more pictures or you know let my fans see something about me other than music yesterday I called my self doing that my son birthday was the weekend so I decided I would let y’all see how much fun we had you know the pictures/ videos I posted of my son wasn’t put out for feedback that was us being us so for y’all to take that and make it what y’all did just reminded me of why I keep my family private.”

“I will not be showing my son or any of my family on this sh*t again y’all lost thst privilege this is for me to promote my music and thats what I’m gone use it fir nothing more nothing lesss,” he ended the message. 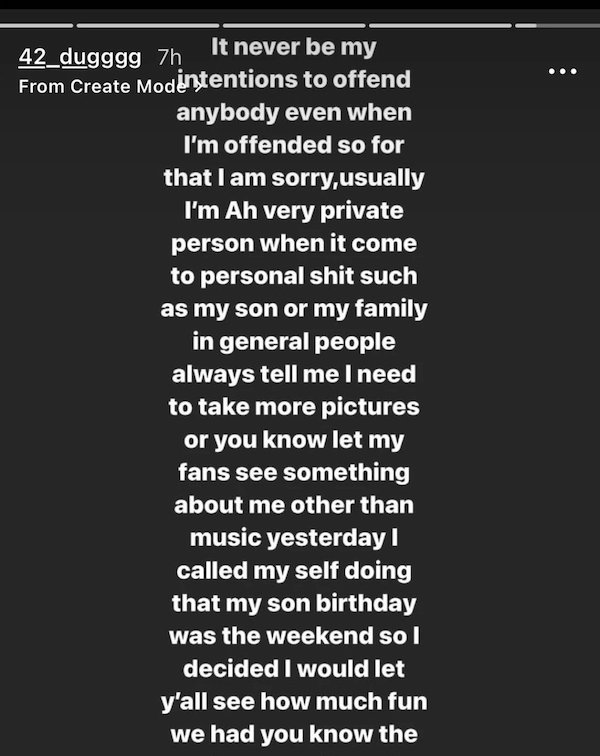 42 Dugg is the second rapper over the past few weeks to receive backlash for ‘homophobic’ comments. “Rockstar” rapper DaBaby came under thick criticisms after a ‘homophobic’ rant at Rolling Loud Miami, and he is still facing the consequences. In the latest news, the rapper was dropped by Lollapalooza for his anti-gay comments.