Nicki Minaj could be the new host of Real Housewives of Potomac Reunion.

The Trinidad-born rapper is known for her vibrancy in her music and fashion. She showcases this with a variety of bold and colorful wigs and her bubbling personality. The “Barbie Dreams” rapper recently shared on her Instagram that she is interested in hosting Real Housewives of Potomac Reunion, sending her fans into a frenzy.

Nicki Minaj shared a montage of clips from the Real Housewives of Potomac series with her song “Moment 4 Life” remixed by the cast.

“I’ll be hosting the reunion,” Nicki wrote. “Lmk what y’all want me to ask chile.”

The caption gained the attention of almost 3 million of Nicki’s 149 million Instagram followers, who are also evidently fans of the show. While it was posted as a joke, the fans were here for Nicki Minaj hosting the RHOP season 6 reunion. One Instagram user commented, ” Nicki please tell me this is for real mama.” Real Housewives of Atlanta star Porsha Williams also chimed in, ” Wait what? Hell yeah.”

Within a matter of hours, Nicki tweeted a photo of a conversation between herself and her publicist, Joe Carozza. Joe wrote, ” Andy Cohen said he would gladly give up his seat to have you host the Potomac reunion. Tapes around October.”

Her publicist further expressed his delight in the concept as he replied to her message. “Would really be a funny f**king moment I like this idea,” he said while Nicki responded saying, “I want to do it.” 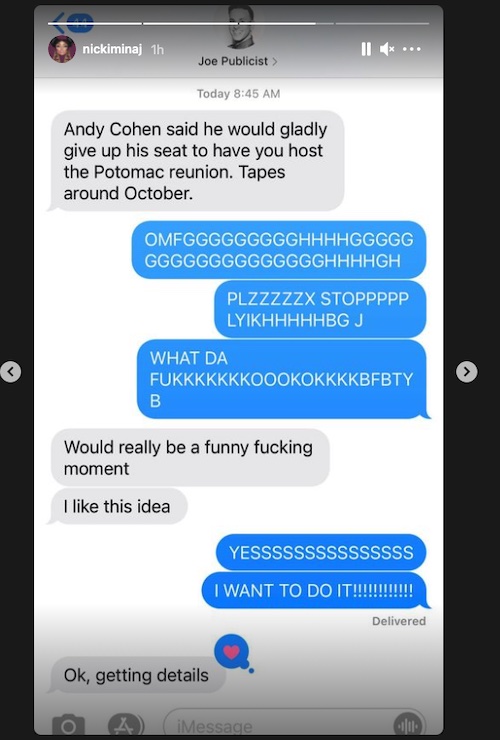 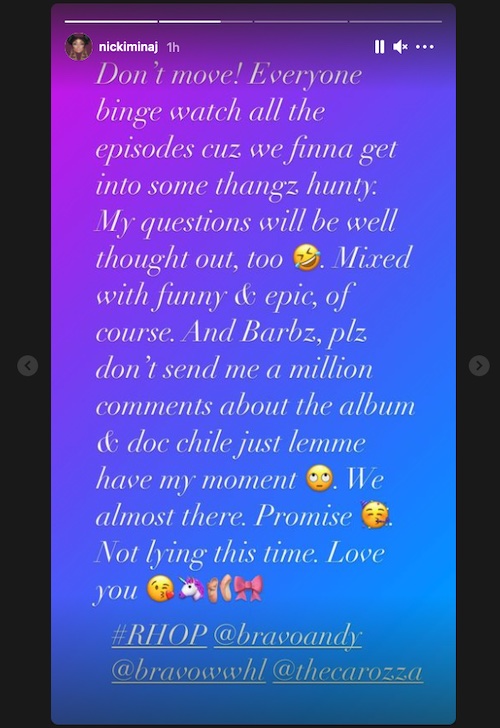 Nicki’s publicist ended the convo with a final, “Ok, getting details.”

Nicki did not hesitate to jump at the opportunity. She wrote on her Instagram, “Don’t move! Everyone binge-watch all the episodes cuz we finna get into some thangz hunty. My questions will be well thought out too. Mixed with funny & epic, of course.”

Nicki Minaj told her fans, “And Barbz, plz don’t send me a million comments about the album & doc chile just lemme have my moment. We almost there. Promise. Not lying this time. Love you. #RHOP.” She proceeded to tag the producers of the show as well as her publicist, Joe.

In the recent past, the Beam Me Up Scotty rapper teased at the possibility of her releasing more new music and possibly another album in the near future.

Fans are excited to see the likes of Gizelle Bryant, Wendy Osefo, and Candice Dillard-Bassett. The reunion episodes will begin taping in the fall, and with the new addition to the team, we are sure it will be quite a treat. Make sure you grab your popcorn and get ready!