Kanye West is preparing to sue Walmart, alleging that the retail giant is selling knockoffs of his popular Yeezy Foam Runner line.

According to the complaint, Yeezy is claiming that that the company copied his line and is selling knockoffs at drastically reduced prices which are leaving his loyal clients in confusion about whether they are getting the real product or not. The situation is potentially causing him millions of dollars in losses, he claims.

Also stated in the documents obtained by TMZ is the fact that the Foam Runner, which was first introduced in 2019, began selling out almost immediately when it was made public in 2020. When it was first introduced, it retailed for $75 a pair. The complaint also stated the brand is popular with celebrities and could be worth billions. 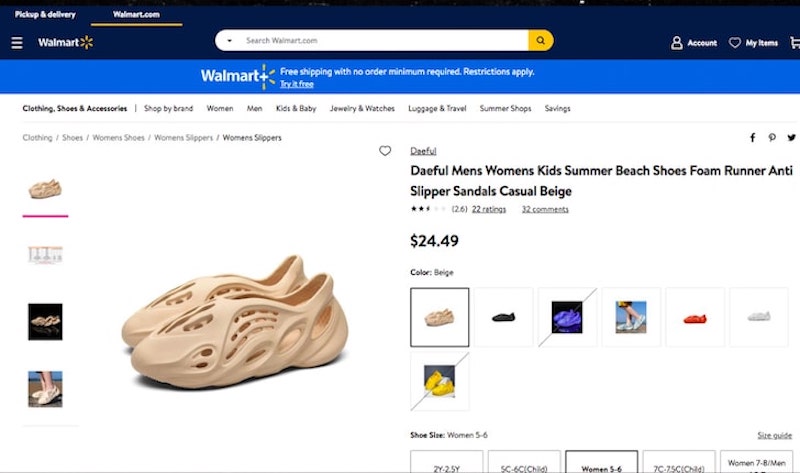 The “All of the Lights” rapper alleges that Walmart made an “unauthorized exact copy” and started selling it for just $25 a pair. This was a blatant attempt to cash in on the popularity of Kanye West and the Foam Runner, the documents go on to state. According to Kanye: “Walmart is flagrantly trading off of his and Yeezy brand’s popularity by offering for sale an imitation version of the Yeezy Foam Runner.”

Kanye West legal team also said that they sent a legal warning to Walmart and requested that they pull the shoes from its site. However, Walmart continued sales. This was even after they provided photos of the two shoes for comparison, according to another report. Seeing that they were ignored, Kanye and Yeezy have decided to sue for major damages.

Another part of the document states that: “Walmart’s conduct is harming and will continue to harm, West and Yeezy, leaving them no choice but (to sue) to stop Walmart’s unfair competition and profiting from the popularity of the success of West and Yeezy.”

Walmart responded to TMZ’s request for a comment on the matter, and a company spokesman said: “The product referenced in the complaint is not sold by Walmart, but rather by third party Marketplace sellers. We take allegations like this seriously and are reviewing the claim. We will respond in court as appropriate after we have been served with the complaint.”

It looks like this one is definitely heading to court.