Jodi Jinx clapped back at troll who suggest that she “killed” Sean Paul’s career.

Sean Paul’s wife, Jodi (Jinx) Henriques, says her husband took a step back from the spotlight to allow Spice to shine in their recent Good Morning America performance. The Grammy-winning dancehall entertainer’s wife made the comment while responding to critics on Instagram.

In response to a user who said she is responsible for Sean Paul’s career demise, Jodi said, “considering you look like death itself you shouldn’t comment but since you need some facts Sean Paul is the most streamed artist in the Caribbean and just performed on Good Morning America this morning…..your brain is clearly dead if that’s a dead career but I guess since you’re at the top your career you’d know right?”

The fan hit back with, “him was one a spice back up dancer dem?”

To which Jinx said, “yes, Spice is an amazing female artist and right now it is her time to shine and Sean was gracious enough to step back and let her step up. Her album is out soon. I hope you’ll support her too.”

While Jinx admitted it was Spice’s time to shine, her comments came off as shady towards the “Go Down Deh” singer. Her categorization of her as an “amazing female artist”, instead of just an amazing artiste, seems to downplay Spice’s achievements in the dancehall arena. 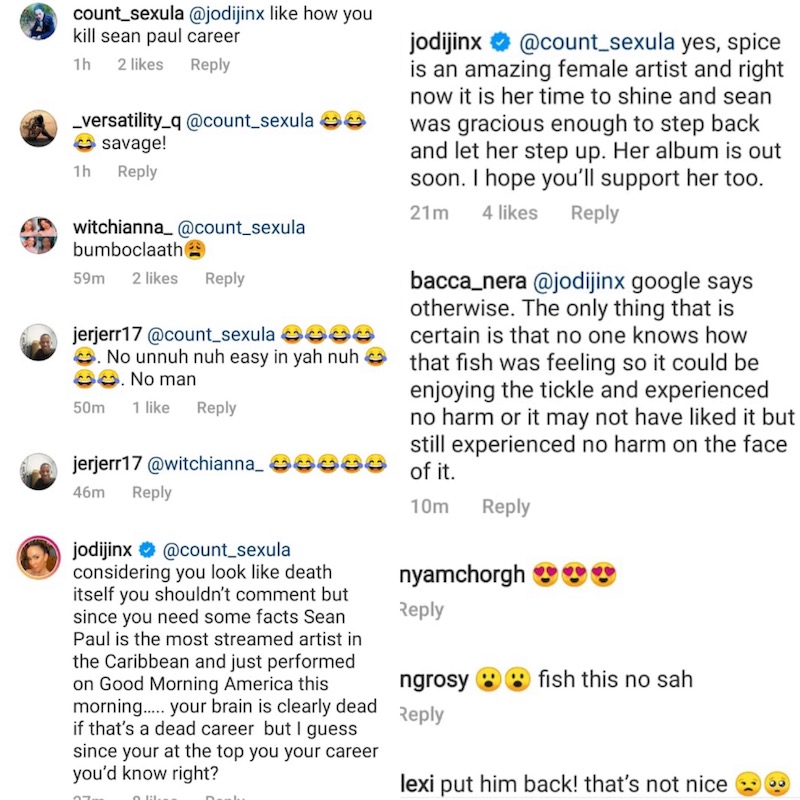 Jodi Henriques’ comments about Sean Paul stepping back were also not taken lightly, with many implying that she may have unknowingly stated that Spice would have been incapable of landing the top spot if Sean Paul didn’t “allowed” her.

Still, the comment from the social media troll did anger Jinx to the point she had to respond. We should point out that the commenter didn’t offer up any evidence to support his claim that Jinx killed Sean Paul’s career. In fact, Sean Paul is still as relevant today as he was in the 2000s.

Spice, Shaggy, and Sean Paul appeared on Good Morning America on Friday, June 11, where they performed their hit collaboration “Go Down Deh.” The single has quickly become one of Spice’s most successful to date, wracking up 10 million views in just four weeks on YouTube and peaking at the top of the global reggae charts.