Mr. Lexx is questioning VP Records’ right to own and control the publishing of 145 of his songs. In a now-deleted tweet made on Saturday, May 22, the dancehall deejay questioned the cruelty of the situation with the Caribbean-owned record label.

“How cruel is this? VP records is telling me they own the publishing for 145 of my songs for the rest of my life. Imagine the countless artists they did this to. Imagine how much artists died without a cent in their account and VP still collects their cheques. How is this legal?” Mr. Lexx questioned.

The dancehall veteran, who reigned supreme during the late 90s to early 2000s, was once signed to the New York-based record label, and together, they created a string of hits. These include “Hold The Line” featuring Santigold, “Anything Goes” with Capone N Noreaga and Wayne Wonder, “Full Hundred” and “Clothes A Nuh Yuh Problem.” 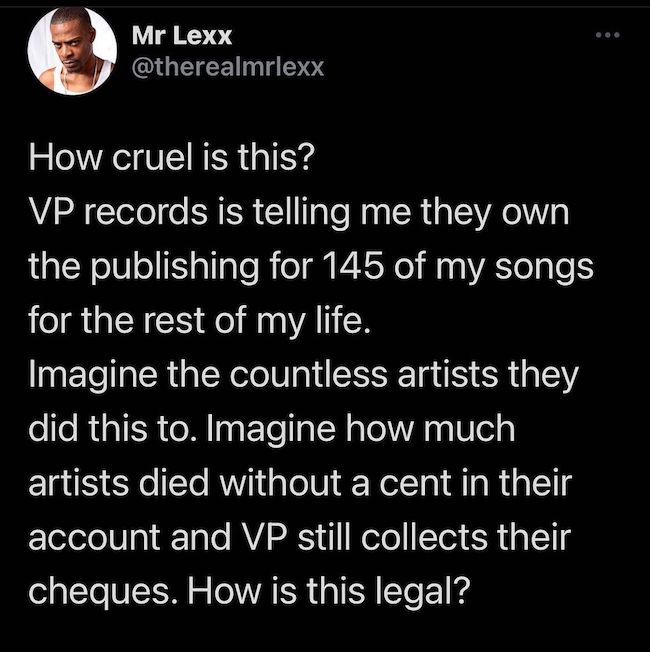 Iin 2011, after over 10 years of working together, Mr. Lexx announced that he was parting ways with VP Records. Mr. Lexx told the media then that he would be focusing on Gigios, his own record label, and also promoting his new artists. Mr. Lexx is now expressing that he regrets signing with the label and is encouraging young artists not to make this mistake.

The artiste posted a video of American producer and singer Pharrell Williams speaking out on the same issue and captioned the post, “Don’t make the mistakes we made. Y’all pay attention.”

This is not the first issue of this sort that has been made public in relation to VP Records. In 2018, Spice threatened to sue the record label over her album release that the dancehall community had been waiting for for more than a decade.

“I’m tired of fans asking me about my album I’ve been signed to them for 10 years and they never ever released one album for me,” Spice wrote on Instagram in July that year. “I do absolutely EVERY THING BY MYSELF. I finance my own career and push my own music while Dem siddung inna A/C Inna dem office every day a drink red wine. This was the biggest mistake I’ve made in my entire life.”

In 2020, Spice also took to Instagram to urge the record label to release her song “Frenz,” which was previously recorded and seemingly shelved by the label.