Soulja Boy called out his ex-girlfriend in his response to her lawsuit for sexual battery.

While Soulja Boy‘s name has been thrust back into the spotlight with his latest hit, “She Make It Clap,” it’s the recent allegations filed against him on Tuesday, May 11, that have been securing headlines all over the country. The rapper recently broke his silence on the controversy through a string of tweets.

The woman, who did not wish to reveal her identity, filed the lawsuit under the pseudonym, Jane Doe, claiming that she was being abused by the rapper for years, TMZ reported. The complainant said she suffered a miscarriage in 2015 as a result of the severe beatings she received from the rapper.

On Wednesday, May 12, Soulja Boy took to Twitter to respond to the anonymous woman’s claims with several tweets, all insisting that the matter is only being brought to the courts because the complainant is looking for a major payout.

“Will somebody come get they broke a*s daughter,” he fired off on Twitter while adding, “At the end of the day, sometimes us men just pick the wrong females to be with. I’m a legend I can’t date a b*m b*tch that’s out.”

“A man provides everything and all you provide is an attitude? Stop it you gonna get cut off. P***y is everywhere. Simple,” he continued without any denial of the acts he’s now being sought for. 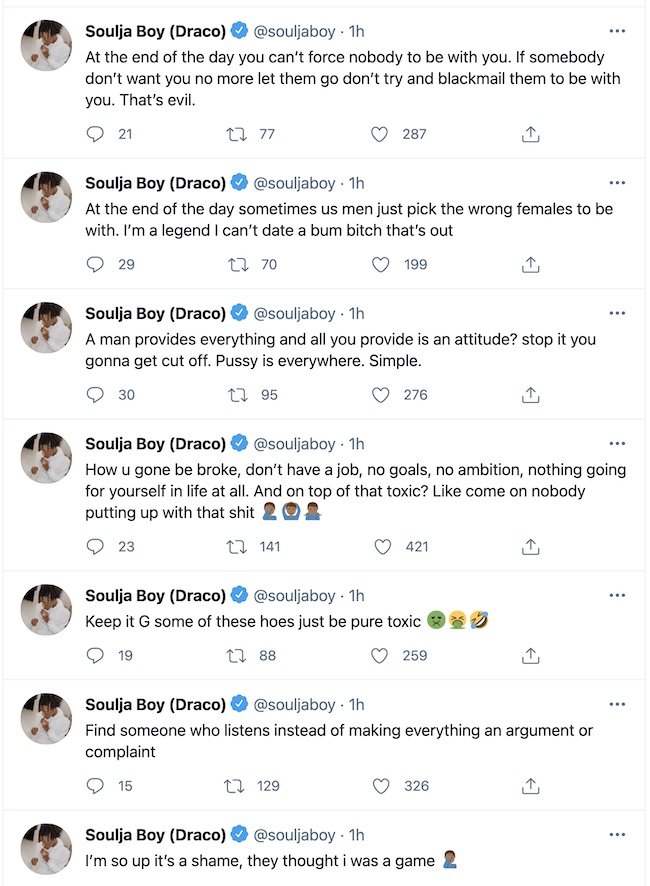 He continued, “At the end of the day you can’t force nobody to be with you. If somebody don’t want you no more let them go don’t try and blackmail them to be with you. That’s evil.”

This tweet, though agreeable, totally contradicts the reports of the woman. The anonymous Jane Doe claimed that she was physically abused multiple times, including when she tried to leave the relationship. But there is one view the two seem to share… that the relationship was toxic.

“How you gone be broke, don’t have a job, no goals, no ambition, nothing going for yourself in life at all. And on top of that toxic? Like come on nobody putting up with that sh*t.”

In another tweet, he added, “Keep it G some of these ho*s just pure toxic.”

It has not been revealed how long the two were in a relationship. However, court filings by Jane Doe hinted that things became rocky in 2015 when she lost her unborn child. This apparently set the pace for other incidents of abuse, such as a 2018 attack that was caught on a night vision camera while the rapper was filming a reality TV series. The female in question mentioned that the incident was aired on the WeTV network in early 2019. She also made reference to a number of other violent attacks and threats, many of which came about through her refusal to have sex.

She is allegedly suing for assault, battery, gender violence, and more.