Chet Hanks is being sued by his ex-girlfriend Kiana Parker for alleged abuse.

Hanks, who is the son of renowned actors Tom Hanks and Rita Wilson, and Parker apparently, shared a violent relationship which led to the breakup and Parker being granted a protection order to restrain Hanks from coming into contact with her last month. The lawsuit, which was filed on Monday in Bend County, Texas, says that Hanks physically and verbally abused her during their relationship, and it sought damages for $1 million. Her lawyers in a press briefing in Texas say that during Parker’s relationship with Hanks, he showed “an ever-escalating pattern of domestic abuse.”

“This is about violence within the confines of a relationship between a man and a woman, a man who mentally and physically and psychologically battered, Kiana Parker,” her lawyer Kevin Murray told reporters.

The lawsuit also set out a number of alleged incidents of abuse, including a Jan. 8 fight that led Parker to file a restraining order against Hanks. The lawsuit traces the beginning of the relationship to March 2019, after which the couple moved in together in 2020.

They began having problems later that year, which according to Parker, became violent.

The lawsuit details one such incident on Oct. 18, 2020, where she claims that Hanks became enraged after she tried to leave their hotel room in New Orleans. At the time, the couple was in the state to film “Your Honor,” which airs on Showtime.

She added that that night he allegedly became“became aggressive and hostile,” and as she attempted to leave, he “grabbed her with great force, by her right arm causing instant pain.”

“Defendant Hanks refused to release the grip, and as Parker sought to get out of the violent situation, Defendant Hanks pushed her with such force that Parker knocked over tables in the room,” the lawsuit said.

She also claimed that he pushed her and called her a “ghetto black bitch” and smashed her phone into pieces.

She also said he warned her not to report the incident as nobody would believe her since he was “Chet Hanks and she wasn’t sh*t, no one would believe her, she was just a ghetto black bitch.”

Her lawsuit also details a threat on her life in Sugar Land, Texas, where she alleged that Hanks “threatened to “blow [Parker’s] brains out” in a murder-suicide. She says the conversation occurred allegedly while her 9-year-old twins were in the house. 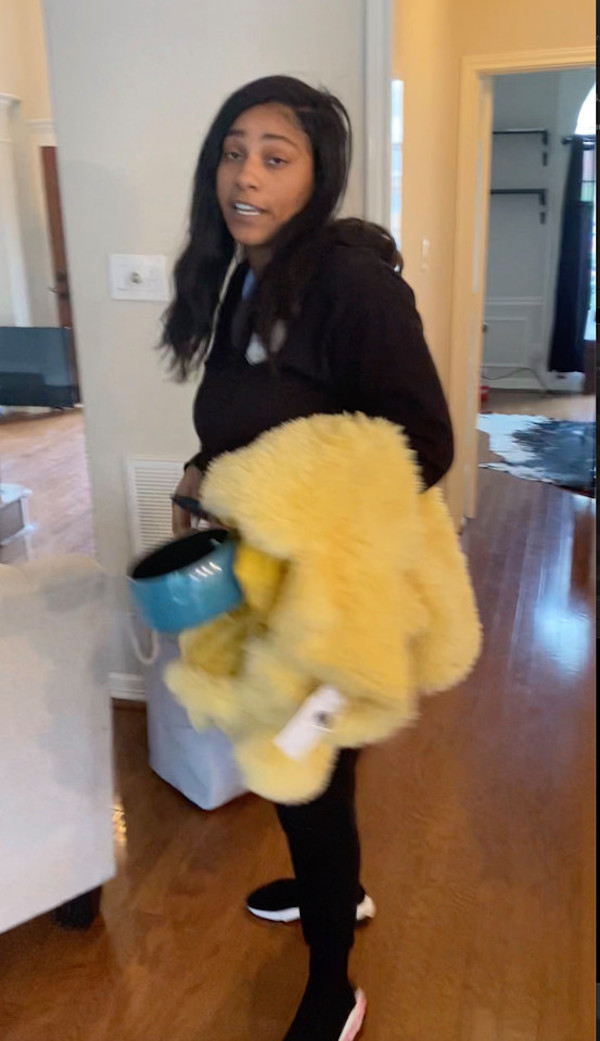 The couple split on Jan. 6, but two days later, when Parker went to move her stuff out of the house she lived with Hanks, she alleged he “became extremely aggressive,” and came at her with a knife- which forced her to use a pot to swing at him in defense.

A video which surfaced of one of that incident, however, tells a different story. Chet Hanks, who made a selfie video of the incident, accused Parker in the video of using a knife to threaten him, which is the opposite of what Parker is claiming.

The video shows Parker walking around with a knife and pot in her hand as she hits at Hanks’ camera, then the tense moment as Parker lunges at Hanks with the pot and bashing him in the head (not shown on camera), as blood runs down his face. Hanks, in the video, also accused her of stealing his money and his credit cards.

Hanks later sued her for assault and battery, theft, and return of monies he claims she stole from him. Hanks has not responded to Parker’s lawsuit as yet. His Attorney Marty Singer told The New York Post that “we consider the claims filed by Kiana Parker to be a shakedown.” The lawyer also said that in the Jan. 8 incident, Parker showed up at Hanks’ house with “a huge male carrying a gun, she viciously attacked Chet which caused him to profusely bleed .”

He added that “her claims are completely false, fabricated and fictional.”