Jessica White reacts to Nick Cannon expecting twins with new girlfriend after fans dragged her into it.

Nick Cannon is going to be a father again, this time to twins, as one of his girlfriends shared that she is expecting twin boys. In a post made on her social media account, Abby De La Rosa wrote a note to her unborn sons as she expressed gratitude at expecting the babies.

“Our dearest sons- my miracle babies, thank you for choosing me to be your Mommy. I know the Lord has destined me and prepared me for the gift of not one but two little angels,” she began. “I pray that God give you both the strength to walk brave and boldly in your individual truth just like your Daddy. That God bless you and your brother and guide you into living out your full purpose. Your Dad & I will always be here for you both; in complete unison and support. No matter what this world may throw your way, know that forgiveness is key and what is for you – is for YOU! You both are already so loved and we can’t wait to meet you both,” she added.

Social media went into overdrive as commenters tried to decipher the life of Cannon, who is already a father to five children with three other women.

De La Rosa confirmed in her Instagram stories that she and Nick Cannon reconnected in 2020. “In 2020 the man who is now my children’s father and I reconnected. Never would I ever envision where we are at now,” she started.

“This isn’t a bs “love” story, it’s a REAL story. His openness and honesty won my heart but above anything he is my dearest friend and my partner [in] this world of mine. He changed my life in all the most unconventional ways inspiring me to open my mind to the unknown when it came to loving outside of “labels” and “ownership”. In June [2020] at 2 months, I had lost our first pregnancy and he was so sweet through it all reassuring me that what we’ve manifested will come to fruition…now fast forward to the morning of my birthday- October 25th I find out that I’m pregnant!!!! Then a month later, I found out it was with twins.”

There were also questions as to the life of Cannon as fans struggled to connect the dots among the women Cannon is supposedly involved with. Up to last month, Cannon’s baby mother Britney Bell, girlfriend Lanisha Cole, and De La Rosa, all seemed to hint that they are in some kind of love quad with the Wildin’ Out star. 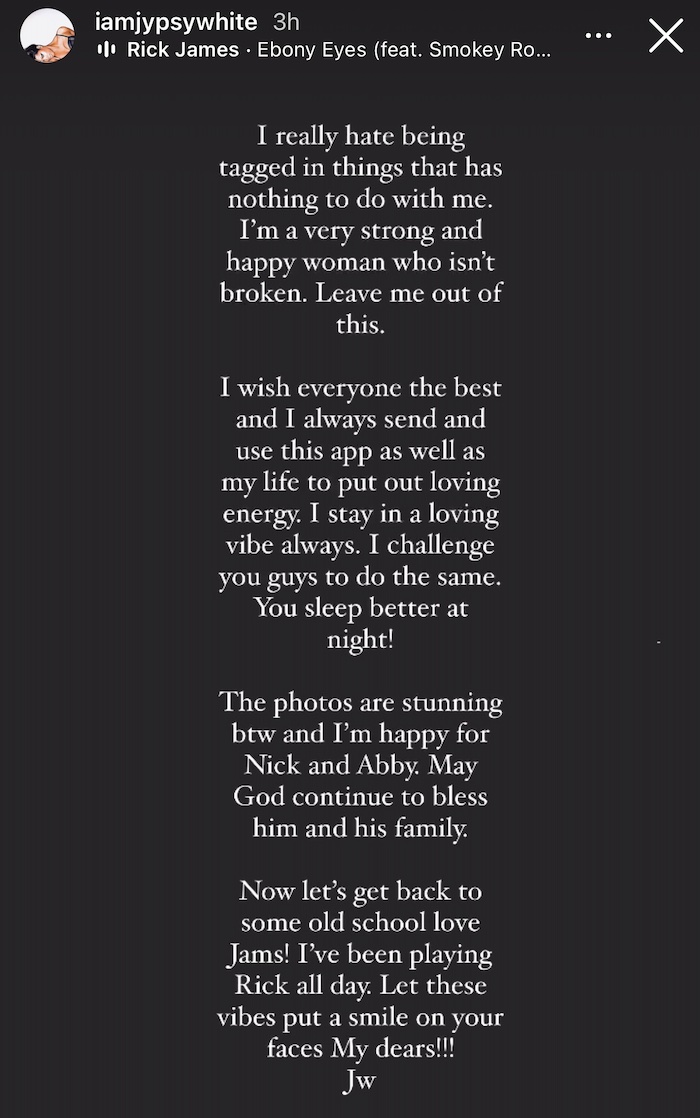 On March 9, Cole had posted throwbacks from a photoshoot she had done for Cannon recently — which resulted in her first-ever magazine cover. In January, news of their relationship surfaced as Cole displayed her new “King Cannon” tattoo.

On that day, Bell also posted a video of Cannon with their son Golden and a photo of their infant daughter — Powerful Queen — who was born in December 2020.

Abby also, around the same time, posted a photo with a Cartier band on her ring finger. Cole is also seen wearing a similar Cartier ring also on her ring finger. Previous reports also showed that Cannon spared no expense as he set up three elaborate Valentine’s Day tokens for each women to show his appreciation.

Meanwhile, Cannon’s former girlfriend Jessica White reacted on her Instagram story to De La Rosa’s pregnancy as she wished them both well.

“I really hate being tagged in things that has nothing to do with me. I’m a very strong and happy woman who isn’t broken. Leave me out of this,” she said to fans who dragged her into the latest pregnancy announcement.

“the photos are stunning btw and I’m happy for Nick and Abby. May God continue to bless him and his family,” she said.

White and Cannon who were said to be dating from 2015, confirmed that the two split in August 2020. Speaking to Fox Soul’s Hollywood Unlocked Jason Lee in January 2021, however, Bell said she was caught by surprise the announcement that Britney Bell was pregnant for a second time. She found out the news on Instagram even as she was dealing with a miscarriage of Cannon’s baby.

The child was allegedly conceived while White and Cannon, 40, were on a break.

“She was aware that I just had a miscarriage two weeks prior to her news coming out because he told me that he told her,” she claimed on Friday, January 8. “I was living at his house, and she knew that as well.”