Rihanna drops some hints she might be releasing a new song.

While Rihanna has been very active as a businesswoman and fashion mogul over the past few years, she has been mostly MIA as a recording artist. Her last album, ANTI, was released way back in 2016, which feels like a decade ago following the madness of 2020. Since then, Rih has only occasionally popped up as a feature on other people’s songs, such as her appearance on PartyNextDoor’s track “Believe It,” which dropped in March of last year. Of course, RiRi fans are not at all satisfied by a few features and instead have been demanding a full-length album from the singer for years now.

The good news is that while a Rihanna album doesn’t seem to be on the horizon anytime soon, the singer did tease fans this week by suggesting that she may be releasing a new single soon. Excitement built surrounding the prospect of a new track from the Barbados beauty after Rih shared a post from Chart Data about her ANTI album.

The post announced that ANTI has now spent “5 full years on the Billboard 200” and that the project is the “first album by a Black female artist to reach the milestone.” Rihanna captioned her post, saying, “grateful to the most High for putting die hard supporters in my circle #ANTI #WomensHistoryMonth.”

One follower responded to the news in typical Navy fashion by asking for new music. “Celebrate by releasing a song!!” the user suggested. Surprisingly, Rih answered back with a reply that put hope in the hearts of Rihanna fans everywhere. 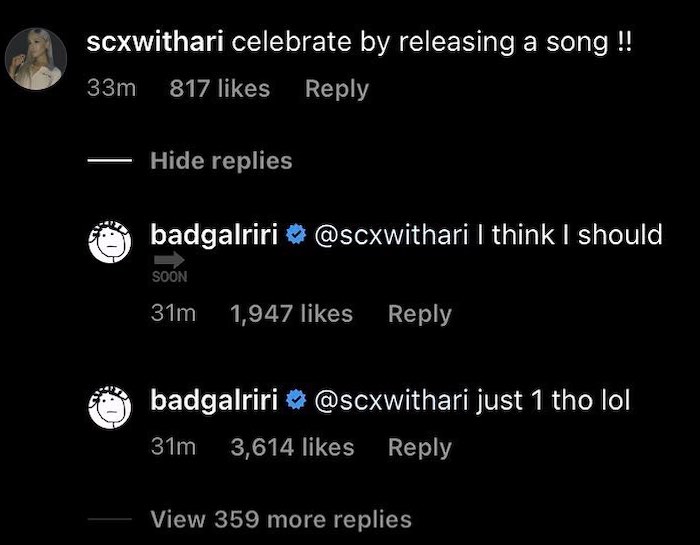 “I think I should,” RiRi replied. She then added a cruel condition to the deal, saying, “just 1 tho lol”. The post has everyone praying that Rihanna isn’t just leading us on, but only time will tell if a new song is really on its way to our playlists or if the singer is doing what she is known for and breaking everybody’s hearts.