It would seem that there is trouble in the “Lil” paradise of Lil Uzi Vert as snippets of his mysterious relationship with City Girls rapper JT made their way onto social media. Thus far, neither of the two have confirmed nor denied the status of their relationship, contrary to the public’s vested interest in all the details. The two have long been rumored to be dating, and every now and then, fans get some solid pieces of evidence to support it. However, nothing good lasts forever, and in this day and age, almost everything makes its way onto social media, including a healthy dose of beef. With this said, let the games begin, and may the best clap-back win.

This latest rift was launched when Lil Uzi Vert tweeted a simple message that read, “I only love myself.”

Well, it seems JT quickly took offense to his words and decided to fire back with, “Same here, f**k ni**a!”

Devoted fans immediately picked aside, and many hopped onto the support bandwagon for JT. One fan even went as far as tweeting a bit of advice to JT, stating, “Please stop letting this ni**a embarrass you.” 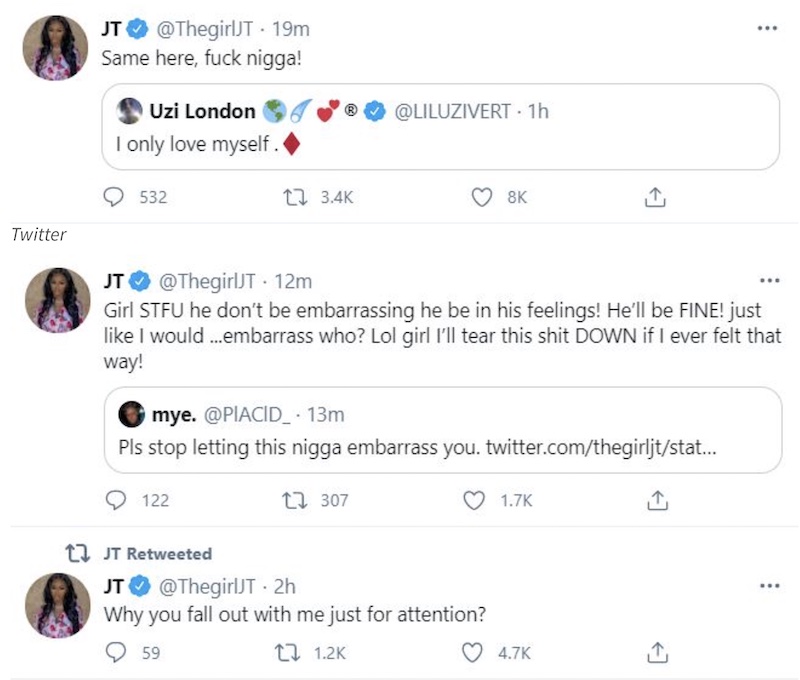 Sadly, that fan got a quick chiding for inputting her 2 cents. JT lashed out, tweeting,” Girl STFU he don’t be embarrassing he be in his feelings! He’ll be FINE! just like I would …embarrass who?” “Lol girl I’ll tear this sh*t DOWN if I ever felt that way!”

Naturally, fans of both stars had a lot to say about their heated feud. Many expressed that they make a strange couple, while others felt that JT could do so much better. Others who pointed out that Uzi did, in fact, embarrass her noted that she should have taken her L in private. Well, it seems that she is also now of that opinion as she later deactivated her Twitter account.

To that end, one fan noted that JT was exhibiting non-city-girlish behavior while added quipped, “She’ll be aight.” With the strong tempting pull of social media, we know we’ll be seeing JT’s return in short order.