18-year-old rapper NLE Choppa has developed a reputation of being one of the few “woke” young entertainers in the music business. The rapper has touched on topics such as politics, health and wellness, and overall spiritual health on his social media platforms, something another prominent young artiste did in the 90s. That rapper was none other than the California legend Tupac Shakur.

The young Memphis rapper, who shares a slight resemblance to the west coast legend, decided to pay homage in one of the most creative ways possible by recreating scenes from Pac’s iconic music videos for his song “Picture Me Grapin.” The song itself offers an updated take on “Picture Me Rollin” from the 1996 classic All Eyez On Me album, which was released the same year he was gunned down. 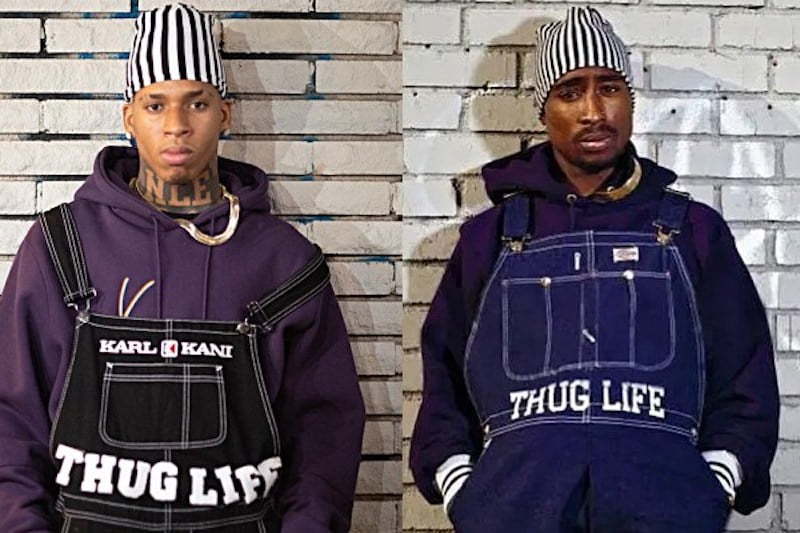 The original offers a smooth, effortless flow, which is synonymous with West Coast flavor, while NLE’s take packs a few additional rhymes into each bar. The track is complemented by the visuals directed by Choppa and Ben Marc. Among the videos recreated was the Bad Boy diss track “Hit Em’ Up,” the lowrider scenes in “To Live And Die In L.A.,” and the house party captured in “I Get Around.”

Karl Kani was drafted to help with remaking a couple of Pac’s portraits, something NLE had to shave his head to accomplish. Some of the stills fashion modifications include the “Thug Life” overall and a navy blue hooded sweatshirt.

Choppa has seemingly run into some issues with his label at Warner after they allegedly tried to “trying to disable my freedom of speech on the platform I worked best.” According to the young rapper, this could be the last music video he releases until conditions get better.