Dwyane Wade is leaving his kids feeling some type of way after posting too much on the Gram.

Many parents will tell you that it is their duty to embarrass their kids. It looks like Dwyane Wade is taking that advice to heart after a photo he posted on his birthday led to comments of disgust from three of his children, including his opinionated 2-year-old’s Instagram account. The picture was posted early on Wade’s 39th birthday and showed him standing completely nude with his lower half being blocked by his wife, Gabrielle Union, who stood smiling in front of him in a bathrobe. “Birthday behavior!! 39 is already looking up,” Dwyane captioned the post.

Dwyane’s 18-year-old son, Zaire Wade, was the first of his children to comment on the post, writing, “This isn’t what i wanted to wake up to,” along with a nausea emoji. His 13-year-old daughter followed shortly after with the comment, “Ayooooo chill, I just got on,” followed by some shocked and sad emojis. Never one to be left out on social media, 2-year-old Kaavia chimed in on the post last, adding, “Thought I had more time before his midlife crisis.” Of course, Kaavia’s account is run by her parents, and the comment was likely a joke crafted by her mom. 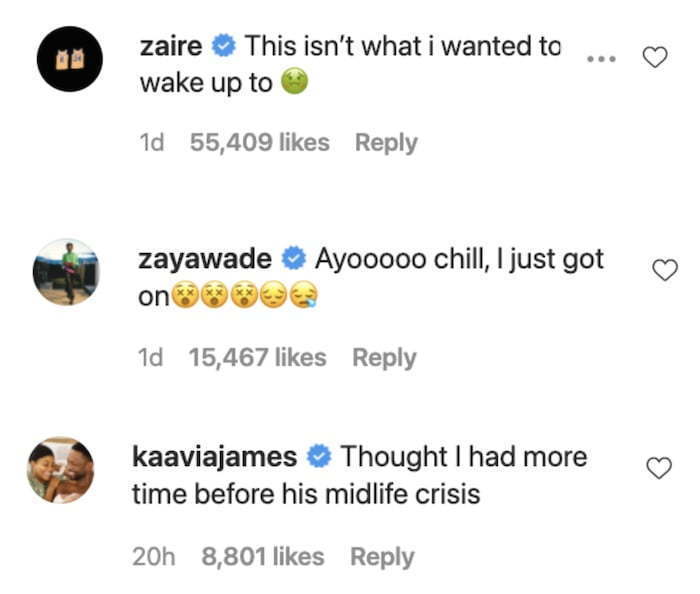 Despite the shade from his kids, who obviously think of themselves as much cooler than dad, Dwayne’s birthday photo was liked over a million times on Instagram. The athlete has an impressive body and is certainly aging gracefully, so there’s no reason he shouldn’t be able to flaunt what he’s got. Dwyane Wade and Gabrielle tend to keep their social media feed fairly PG, but it looks like they decided to have a little more fun for Wade’s birthday.

Considering the man has two teenagers and a toddler with a whole lot of personality, this surely won’t be the last time we hear about his kids passing some judgement on their father’s social media behavior.