LeToya Luckett announced that she and her husband Tommicus Walker are getting a divorce.

She added, “it is my deepest desire for us to be loving co-parents and keep a peaceful environment out of respect for our children.” She further asked fans and well-wishers to respect the privacy of the couple. “Please understand our need for privacy. Thank you in advance for your prayers, support & space to heal as we tread through this challenging time.”

Tommicus also acknowledged the divorce news by posting, “LeToya and I have decided to get a divorce. This was a very difficult decision. We remain committed to our family as co-parents….we happily remain committed as caring friends with a great love and respect for one another.”

As the shocking news hit the internet, Tommicus took to his Instagram to dispel rumors that he cheated on his wife and blamed “outside forces” for the marriage breakdown. According to unconfirmed reports, Tommicus was seen with another woman dining the night prior to his wife announcing the divorce. He said, “to any married couple, trust that God can work things out despite what might be the present state right now. God is the only person that can change the circumstance (s). I never wanted a divorce, but outside forces can create a lot of confusion. For the record, I NEVER STEPPED OUT ON MY WIFE,” he said.

In late 2020, a video was leaked on the internet showing a man alleged to be Tommicus in a Dallas hotel room with another woman. Persons who viewed the video believed it was Tommicus because he has the same leg tattoo- a name- Tommicus’ mother’s name. The video also had the man committing sexual acts, and another shot showed him sleeping. During this time, LeToya Luckett was pregnant with their second child, Tysun, who was born a few weeks later. Tommicus Walker was also in Dallas at the time of the alleged video.

During a recent episode on the reality series T.I & Tiny: Family and Friends Hustle, LeToya says on camera that while in Dallas, she and Tommicus did not speak as they had had an argument just prior to him leaving. She accused him of being spiteful, argumentative, and dismissive during times they have marital problems. He would often go away for days without contacting family. 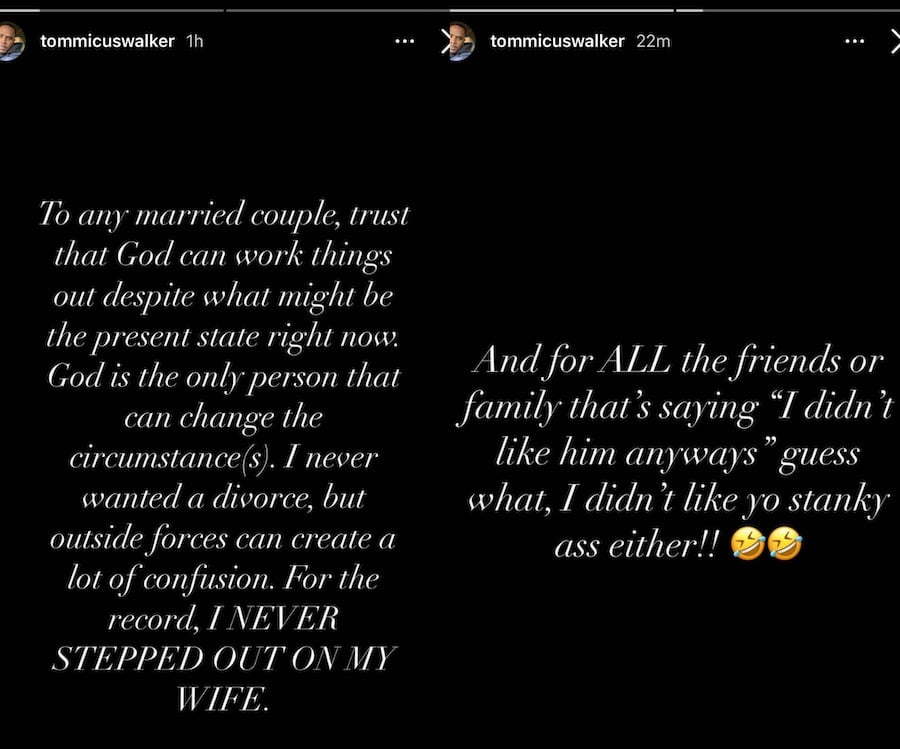 Meanwhile, fans have speculated about the state of the couple’s marriage following the cheating rumors in Dallas as Letoya Luckett hasn’t posted any photographs with her husband and has also reportedly been seen without her wedding band. Many were not surprised at the divorce news as they accused Tommicus Walker of being narcissistic and saying that LeToya deserved better than the way Tommicus treated her, particularly after his mother died.